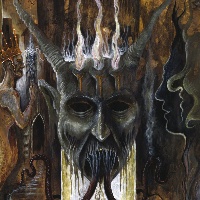 Formed apparently in 2017 by a French multi-instrumental vocalist known only by an esoteric moniker Asthâghul, and immediately debuting with "Mystic Echo From A Funeral Dimension", which I did not get a chance to hear before "Pandaemorthium", Esoctrilihum is a black metal project that seeks to redefine black metal at its core. Its music is an amalgamate of Emperor-ic, Dimmu Borgir-ian, Behemoth-ic and Opeth-ian bombastic arrangments, Immolation-ic and muted Morbid Angel-esque ominous cavernous riffing, Deathspell Omega-ian dissonant guitarwork and Dark Tranquillity-ian melodies. Given the incredibly prolific nature of Asthâghul’s work, on which I elaborate later, is this here, the sequel to "Mystic…", worth your while?

The short answer is precisely: yes, no, maybe, it depends. After a stock black metal intro, "Open the Gate of Unknown Path To The Metamorphosis Descent", it is "Rotting Way of Damnation" that best represents the aforementioned amalgamate. The guitars sometimes remind me of Hypocrisy’s "The Fourth Dimension" album, and, indeed, "Prison of Flesh" has a similar melody to "Reincarnation" about halfway through. The serpentine, at times very complex arrangments can be satisfying and even exciting, with multiple surprises, now a riff, such as the melodic Emperor-ic one around 3:00 (Shaôg Ög Magthôth) or the sudden dissonant Deathspell Omega-ian barrage with an excellent Immolation-ary slow down in "Nocturle Ars Fh’a", now a melody, as in transitions around 3:50 and 6:10 (Sepulcrum Miseriæ) or surprisingly delicate Agalloch-ian strumming with clear melodic guitars recalling early Opeth, Katatonia or Daylight Dies for multiple melodies in "Breath of the Silent Shape". These are all things that make listening to "Pandaemorthium" a pleasure, especially with the very ominous and creepy vocals adorning the arrangments, higher in the mix and cavernous tribal drums supporting and supported by often deafening bass.

The biggest flaw of the album lies in its production. To butcher Thomas Jefferson’s life motto, I have sworn eternal hostility to every form of lo-fi "tru" metal production that is thus only nominally heavy but, in truth, laughingly primitive if not downright painful to listen to. I have no doubt that Asthâghul is a very talented and skillful musician who purposely makes guitars sound like a bee stuck in a tin can farting itself to death rather than he’d be plagued with a low budget dilemma. "Pandaemorthium" production is, then, ripe with several problems: the vocals are higher in the mix than everything else, guitars are often barely audible to almost unlistenable while at other times suddenly heavy and abrasive with excellent riffs which sometimes go dead stop & go, which kills the momentum. The music is sometimes too chaotic for no apparent reason, as if he were making it up as he went along. It seems climate and atmosphere are emphasized above power and heaviness which makes Esoctrilihum sound original but weak.

Seeing as Esoctrilihum did something in 2018 more typical of 80s German disco bands such as Modern Talking or CC Catch – released two full lengths in the same year, here is to hoping that "Inhüma" corrects the production and songwriting problems of its predecessor as, on this, the second full length, there is a tremendous potential, skill and talent that hardly translates into actual songs.