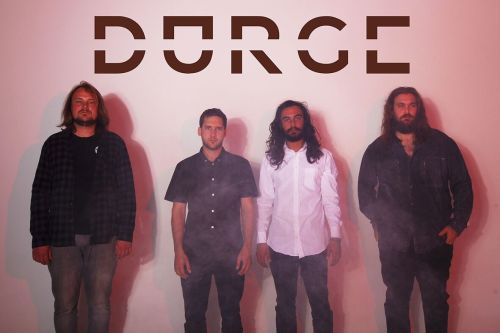 from the album
"DIRGE"
Out 2018
The Statement

DURGE was formed in Cape Town, South Africa in 2016 by Mark Ellis, Francois Taljaardt, James Lombard, and Heinrich Wesson. Over the past two years the band has been forging their unique sound that they call "Melandelic Rock", a fusion of melancholy and psychedelic sounds. They’ve recently released their debut EP titled Dirge, a collection of songs that Texx and the City called,

"a dark, brooding debut that perfectly defines its title."

"Being very much a DIY project and the band’s first official release (with the help of some close friends), this EP is something close to the hearts of all four members. It also marks the start of an exploration into our sound which still has many dimensions to uncover. Dealing mostly with individualism and social issues, Dirge is a short statement to life. "

"DURGE is what’s born when four equally crazy and creative souls melt together. Mind bending melodies are splurged over odd timed beats, producing something new that’s destined to satisfy the dark being inside of you, eagerly waiting to step into the twilight. The result will leave you intrigued and longing for something or someone that doesn’t exist, creating a space in time where sea meets shore in the middle of nowhere."

Theyʼve released two singles, both recorded live during their debut show in Mercury, Cape Town. It received positive feedback and shortly after, they joined The Young Folks for a Johannesburg tour which included a show with Francois van Coke at The Railways Cafe. After a successful start for the band in 2016 they ended the year by playing at MALKOP festival.

2017 boasted some challenges as drummer James Lombard was touring abroad for extended times while playing in musical productions. Although not very active in the scene they took the time to start recording their first EP and played a show at Aandklas with The Black Cat Bones.

Early in 2018 they finished the recording of their debut EP which was recorded at Tunes Studio. The EP was recorded, mixed and mastered by one of the bandʼs talented friends Wynand Fourie. With the EP launched, The band aims to get back on the circuit and start gigging again in full force.