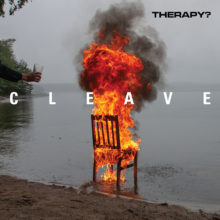 Back in 1994, when every ear was seemingly tu(r)ned to grunge, heavy metal slowly losing its mainstream grip, I heard this fresh-sounding single "Screamager", a punkish Judas Priestly angst-driven statement from an even better album "Troublegum". Every song on the CD was different and made a lasting impression on me, as I played it almost as often as Megadeth’s "Countdown To Extinction". The 1996 "Infernal Love" was actually more ambitious but it did not hit me quite as hard. Then the Northern Irish alternative punk rockers Therapy?, formed in 1989, despite continuing releases in regular intervals, disappeared from my view for 22 years until this new, 15th full-length, heralded by the label as revisiting "Troublegum. The only sensible question, then, is, how does it compare?

The short answer is that, indeed,"Cleave", in many respects recalls that classic album. Punkish, angst-driven and supermelodic "Callow" could be "Screamager 2018", "Kakistocracy"recalls" Unbeliever" while "Crutch" and "I Stand Alone" recall "Turn", "Crutch" answering both "Femtex" and "Die Laughing" while itself revisited by "No Sunshine". Too, similar, are the lyrics, with sarcastic the point "With a face like this I won’t break any hearts and thinking like that I won’t make any friends" (Screamager) countered with "I wasn’t born pretty, I wasn’t born rich, everything I’ve got I had to fight for it" (Expelled). So "Cleave" is worthy of "Troublegum". But it’s not the whole story.

The album stands on its own, never ignorant of what made Therapy? 1994 so compelling while able to find itself in the picky fussy modern rock scene, with its recent tendency for eclecticism and progression. To be sure, the Run DMC/U2-sounding opener "Wreck It Like Beckett" must necessarily address the past with a view to the present with a "look in the mirror" as "it just laughs back" and just when you think "it’s gotta get better than this, it gets worse", but already the excellent Alice In Chains-like "Kakistocracy" with its progressive political message where "it’s ok not to be ok" with the world’s recent love affair with corporate-sponsored white nationalism, the message delivered via Tool-ish excellent wailing guitars and Andy Cairns’ echoeying vocals showing a more aggressive, nearly metallic fiber, bolstered by the Mastodon-ish/Ramones-que anti-antidepressants protest anthem "Callow" where you "don’t need your medicine" and "if you take my demons you take my angels too" because "I have seen the face of suicide/it’s such a savage god/but I would rather take my chance/then catatonically stare at the wall", which makes you question your own antidepressants before Therapy? gets heavier on the Prong "Snap Your Fingers, Snap Your Neck" drum pattern/Incubus guitar-driven "Expelled" and U2/Prong-ish "Success, Success Is Survival" with classic Iron Maiden-ish verses.

It’s with the short near-metalcore-ish/Stabbing Westward-ian "Save Me From The Ordinary", halfway throughout the album, that Therapy? mellows out from the "Troublegum" ying represented by "The Knives", "Screamager" and "Isolation" , moody Marrilion-ic progression and moving melodies accounting for the more compelling yang part of "Troublegum" represented there by "Turn" and "Diane". While "…Ordinary" is still punkish and aggressive, already excellent "Crutch" is heavily Stone Temple Pilots grungey while wonderfully sarcastic on pathology of toxic human relations especially the alcohol-born kind, which can be "like an old wound that I can’t stop licking" and "like a scab that I can’t stop picking", which begs the philosophical question so aptly asked with Stabbing Westward’s brilliant "Darkest Days" album: why do humans get addicted to and persist in the misery of their own design that slowly kills them? I Stand Alone", opened with a Metallica "And Justice For All" riff, may be the quintessential Therapy? tune, Cairns "consumed by grief and sorrow" bathed in Machine Head "The Burning Red"/Nine Inch Nails/Paradise Lost "One Second" heavy bass-y atmospherics, while "Dumbed Down" addresses Brexit which if you disagree with "some people like you/hate people like me" and since "I don’t belong here/I’m not pure" you "would send me back to my home but this is my home", with some beautiful Black Flag/U2 guitar transitions, culminating with album’s most moving opus, the black metal-tinged closing dirge "No Sunshine" which strongly recalls Trivium "In Waves" and Prong, where "everyday is the same" as you’re "walking in circles like my ankle’s on a chain" feeling like there’s "no living, no good times, no sunshine" and that "depression is a thief, it robs you of friends and self-belief", the ending, should you choose to replay, fading into the opener, for oppressive continuity, "Cleave", complete with its morbid artwork, offering only grief and sorrow in bouts of depression that’s still prefereble to medicine-induced catatonic numbness.

"Cleave" is an excellent if flawed disc. Performances are simply superb, Michael McKeegan’s deep bass adorning Neil Cooper’s impressive and satisfying drumwork, Cairns’ superior to "Troublegum" versatile vocals and guitarwork, with clear yet doomy sounding powerful production of Chris Sheldon, to say nothing of excellent songs that are, too, superior to, in hindsight, one-dimensional "Troublegum". Some of the songs, such as "Expelled", "Success, Success Is Survival" and "Save Me From The Ordinary" could have been catchier and longer, with twists and turns, but then again, this is not Marillion, U2 or Soundgarden. This is Therapy? and, take it from someone who truly gets Andy Cairn’s concerns, it’s the best one you can get beyond spending the €15 or so to attain it.

HIGH ON FIRE live at Blå –