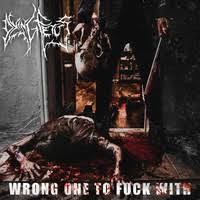 DYING FETUS – Wrong One to Fuck With

Dying Fetus is a veteran of the American brutal death/grindcore, formed in 1993 and established thanks to the classic albums "Killing On Adrenaline" (1996) and "Destroy The Opposition" (2000) In 2001 John "Sparky" Voyles, John Netherton, Kevin Talley left to form Misery Index and the two bands enjoyed fairly equal popularity since. Dying Fetus’ last album "Reign Supreme" was great but something was missing, something I thought this new harshly and crassly named album, which was engineered and mixed at WrightWay Studios, Baltimore, MD and mastered at Goldtone MasterWorks, would fix.

Although Dying Fetus never hid their fascination and inspiration with the core Exhorder/Pantera groove, something Misery Index, too, liberally incorporates, it hasn’t been as obvious and palpable since "Descend Into Depravity" (down to the very Panteric cover) as it is on the "Wrong One". Every song is based around Pantera groove so much that I went ahead and labeled this death metal Pantera. Even the lyrics, though dealing with surprisingly deep subjects such as "wanting a more sensational end

to bring humans to their knees" for "the end of science for God’s kingdom" (whether sarcastically or not is open for a debate) in the opening and one of the best tracks "Fixated On Devastation" or fake repententance and assured redemption of the fallen social morality icons such as convicted Christian preacher/embazzler Jim Bakker brought back from disgrace by bowing down to another social morality icon such as Oprah (Fallacy), still most subject matter’s focused on releasing of anger and revenge, precisely the main concentration of the early 90s Pantera, to say nothing of very Phil Anselmian vocals of John Gallagher in places, especially in the closing title track, which gets almost thrash metal/crossover.

True, there’s variety expanding the usual tried and expected, such the more melodic "Weaken The Structure" paying respects to Black Dahlia Murder in guitar riffs and Obituary in solos or Pestilence/Nile turned  fast Malevolent Creation and Morbid Angel, more complex, varied, very fast picking, with vocals sounding like a literal pack of ravening wolves, but I question the point of a brutal death/grindcore song approaching, much less exceeding the sixth minute mark without much intrinsic progression for justification. The songs are just too long and  even something as good as "Reveling In The Abyss" after a fourth or fifth application tends to get tiresome, as the listener vainly strains his ears for a melody or a hook, but, as in a famous youtube "Batman Interrogates Joker" parody "there’s just fists".

The eight Dying Fetus offering bring very few surprises and, while the performances of John Gallagher (Vocals, Guitars), Sean Beasley (Bass, Vocals) and Trey Williams (Drums) are top notch as usual, as with the predecessor, again, something appears to be missing.