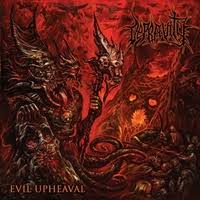 It seems Transcending Obscurity keeps popping out fresh, innovative bands faster than Michelle Duggar babies, if De Profundis, Lurk and Gaerea are any indication. The Australian death metal band Depravity is a fair debutante, having released an EP "Reign Of The Depraved" before this full length, but rest assured, Ansley Watkins (Bass), Louis Rando (Drums), Lynton Cessford (Guitars), Jarrod Curley (Guitars) and Jamie Kay (Vocals) are set to pulverize you with the power of a season veteran the likes of Immolation, Suffocation, Hate Eternal or Morbid Angel. In fact, the label boasts that Depravity’s "Evil Upheaval" is what Morbid Angel should have sounded like today.

While labels sometimes exaggerate their appeal of a band in order to cast it in the most favorable light, as is, after all, their very job, in Depravity’s case the hype is spot on. "Evil Upheaval" is devastating, ultraheavy, take no prisoners, or, better yet, do take prisoners and have them die a thousand deaths, brutal death metal. Kay’s excellent tortured growls resemble Aborted’s Sven de Caluwé, Cessford/Curley incessant pummeling always lock step with Rando’s percussive might. The catchy riffing recalls Morbid Angel, Hate Eternal and Suffocation but the sound, courtesy of my native Poland’s most famous Hertz Studio (Behemoth, Vader, Azarath) is overall unlike any one band in the genre, because while you contemplate Trey Azagthoth in "Despondency" the ferocious solos have more of an Azarath background in the title track, and Napalm Death in "Victimizer". If this relentless brutality with pockets of hooks and slight sinister melody were all Depravity showcased on their debut it would not have turned many, but the most brutally oriented, heads. But there’s more than meets the ear here.

The other side of this outfit is when they get seriously catchy like a death metal Machine Head, Slayer or even God Forbid, where they closely resemble Hideous Divinity and Dyscarnate. On those tracks, specifically "The Great Divide", and the closer "Vile Defloration", the songwriting might just well have been handed down from the four-faced cherubs guarding God for the quality. "The Great Divide: starts out like ominous Slayer met Dyscarnate giving way to chaos and pummeling, a’la Hate Eternal, with wailing God Forbid guitars, melodic Napalm Death and constant, fast changing great riff transitions, melodic thrashy Hideous Divinity with a very cinematic ending, a literal thunder. "Vile Defloration", with, again an epic ominous beginning of Slayer or Machine Head, more melodic Ulcerate, Hideous Divinity and even the patented dissonance of Deathspell Omega, God Forbid and Dyscarnate working their influence again for great melodic solo and keyboards straight out Pestilence’s "Spheres", powerful, audible Watkins’ bass, with underneath melody while ever engulfed in relentless chaos, Kay choking and dying along with whole band slowly phasing out for a disgustingly great and appropriate way to end this ferocious album.

For all the accolades, Depravity is still very rough around the edges. While they are undeniably superb songwriters, average tracks like "Repugnant", "Despondency" and especially "Victimizer" appear underdeveloped as compared to the likes of "… Divide", relying on brutality and technical prowess and even deathcore (Repugnant) with more memorable parts sandwiched in between. "Tormented" is a prime example of a good balance, still very melodic and harmonious but with buzz-saw Azarath guitars, those climatic cinematic keyboards, a ferocious solo, inherent viciousness and an ending with a repeated power chords mimicked by Kay’s vocals as in a Pantera song.

"Evil Upheaval" is a great debut from a band that all things considered may not only sound what Morbid Angel should and doesn’t but may even give old geezers Suffocation a run for their money. Watch these guys closely, we have an Ulcerate-ing potential here.

UNKNOWING – Beyond The Eyes Of Deceit