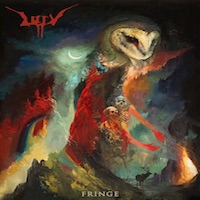 Finnish Lurk is definitely one of the most unique bands I have come across recently. Heavily influenced by funeral doom of Esoteric, with Deathspell Omega dissonant creepiness, the slower material of Hypocrisy and gothic climate of Type O’Negative, Lurk looks all the way to the earliest My Dying Bride while borrowing even from Alan Wilder (ex-Depeche Mode, Recoil) to create its unique tapestry of oppressive sludgy deathly doom. The lyrical concept is extremely difficult to decipher but from what is written they appear to study the futility of human achievement especially in relation to the unknown unseen forces that drive us daily in ways we cannot even conceive of yet somehow suspect might be the case.

The delicate creepy tones of the aforementioned Alan Wilder combined with the heavy synths open up the proceedings only to transform into early Greg Chandler (Esoteric) deep guttural vocalizations of Kimmo Koskinen with guitars slower than a fly stuck in a body of molasses. Lurk closes this weird song abruptly and leans toward Nick Holmes (Paradise Lost) vocally, Kenny Hickey (Type O’Negative) and Kirk Windstein (Crowbar) rhythmically while Aaron Aedy/Greg MacIntosh melodically courtesy of Arttu Pulkkinen’s guitar who also ushers in some dramatic backing clean vocals with monotonous consistent section of Kalle Nurmi (drums) and Peter "Steele" Ratajczyk (Type O’Negative) bass signatures courtesy of E. Nurmi. Lurk’s melodicism further slowly unravels on the subsequent "Reclaim" with Koskinen channelling Jeff Walker (Carcass) and Pulkkinen’s guitar mimicking Christian "Hasjarl" Bouche (Deathspell Omega) layered with Brendt Hinds (Mastodon), while either Koskinen or Pulkkinen resurrect Layne Stayley (Alice In Chains) on the bluessy "Elan". The biggest surprise and my most favorite track is the perfect "Offshoot” in the vein of early Calvin Robertshaw/Andrew Craighan duo with Kimmo perfectly matching Aaron Stainthorpe (My Dying Bride) and Hypocrisy’s Peter Tägtgren, a song I can listen to on repeat constantly without a chance of getting bored. Aedy/MacIntosh and Bouche return on the “Furrow” and “Nether” and the closing "Proteus Syndrome" recalls Hypocrisy’s "The Arrival Of Demons" from the classic "The Fourth Dimension" album.

"Fringe" is a definitely interesting record that suffers from some lack of songwriting focus, whereby many songs feel like a jazz rehearsal as if Lurk was making it up as they went along. But the record is full of catchy and groovy moments while benefitting from several applications to fully absorb aided by good, unique production. Being as I am not an avid fan of this style I must admit that I was impressed with "Fringe" and I am looking forward to hearing from this talented outfit in the future.