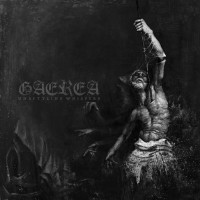 Suicidal depression should get its own separate drawer in human psychology, as it is somewhat different from the regular kind which often just merely despairs of life. In contrast, suicidal depression is human being simply unwilling to exist in a vastly murderous, cruel, deeply hostile and inhuman environment we call Earth. Suicidally depressed people seem to be the ones who truly understand the words of the Preacher of Ecclesiastes "he who increases knowledge increases pain and sorrow". They see the world for what it is: a dying planet full of dead species that naively thinks itself alive and they want no part of it. Some find religion others faith and yet others purpose, something worth living for since anything is an excuse to die, but if they don’t, they choose to leave this world behind. "Unsettling Whispers" is their story. Lyrically and sonically brutally intense, Portuguese melodic black metallers Gaerea explodes with a seemingly contradictory fury of a seriously suicidally depressed person.

At inception, in a bleakly alternative synthpop ambient semi-intro of Depeche Mode’s Martin L. Gore – inspired opener "Svn", a move totally unexpected as non-metallic, Gaerea slowly teases you inside like a virgin resolved to break chastity vows, but as you settle down for a pleasant relaxing sensual ride somewhat ominous by Haborym BM Guilherme’s wails reminiscent of Jonathan Davis’ emotional outburst on "Daddy" from Korn’s debut, one of the saddest melodies I’ve ever heard ushers in drummer Nuno’s sudden sonic blastbeat of raw black with Guilherme’s ultrariffs neither Matthias Sollak (Harakiri For The Sky-HFTS) or John Lewis "Haughm" Ham/Don L. Anderson (Agalloch) would be ashamed to call their own, bolstered by Scott Kelly/Steve Von Till (Neurosis) hardcore riffing. There’s no going back, tag, you’re it, as you suck in the now Marcus Bischoff’s (HSB) meets Michael "JJ" V Wahntraum’s (HFTS) vocalizations of Haborym, his guitar reminiscent of Maik Weichert/Alexander Dietz duo (HSB) for the fantastic "Whispers" followed by decidedly Peter Tägtgren-ian (Hypocrisy) "Lifeless Immortality", with Kenneth Hickey’s "October Rust" (Type O’ Negative) ending melody. But my favorite track is the sludgy utterly hopelessly bleak "Circle Of Decay" where you can hear the DECISION formed in the protagonist’s mind: leave this world behind even at the unknown price of forsaken eternity!

On "Unsettling Whispers" Portuguese Gaerea truly lives up to its declarative statement taken from their bandcamp page: "Let’s make one thing clear. We need to stress the fact that our era is lost in a huge void of numbness. We are here to bring and present you what your system could not solve by itself. We’ll cover the daylight with ashes and smash the massive skull that’s blocking your brain and will to evolve" Some of the tracks could have been even more developed convoluted and varied, particularly "Extension To Nothingness" which seems to just echo "Whispers" but a great majority, such as the closer "Catharsis" (which is far from Machine Head’s trainwreck song and album of the same name) are extremely well written and make for a deeply immersive experience that is only made better with consequent replay. Finally, the bombastic obnoxiously loud production may be a throw off for some but I actually appreciate black sounding heavily metal as opposed to the "trv" lo fi equivalent of a bee stuck in a tin can, repeatedly farting itself to death.

Gaerea is another pleasant surprise from Transcending Obscurity, the label that floored me with the fantastic new De Profundis release, and this is not nearly the last release to do so as you will soon find out. A thunderous, deeply authentic and all-immersive debut from one of the year’s most promising debutante’s comes highly recommended by your friendly neighborhood reviewer. Get it and surround yourself in suffocating suicidally depressive smell of soot and ashes of a planet invisibly on fire set by its most destructive species which deserve to be speedily extinct lest the whole thing goes up in flames.

DARYL EASLEA – Without Frontiers: The Life and Music of Peter Gabriel