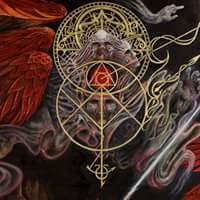 Just when you thought there was nothing new under the sun, your very own city of residence spawns a melodic avant-garde black metal band that defies lyrical/image categorization to boot. Panegyrist, which means one who delivers a eulogy, is a project of a Chicago painter (who created the artwork) and spiritual poet/musician, Elijah Gwhedhú Tamu whose complex ambiguous ambivalent spiritual lyrics serve as the backbone for no less elaborate music. The music borrows from the likes of Deathspell Omega, Emperor, Enslaved, Dimmu Borgir and Carach Angren in the way of sweeping long arpeggio-laden epics one can hardly call songs. Instead, Tamu’s vision incarnate is as close to classical music as a metal record can get without ceasing to be metal.

The two things that are immediately impressive is Paul Moore’s palpable booming bass and the production: robust, balanced, and creepy as Deathspell Omega’s "FAS" album, with which it has a lot to do vocally and musically while nowhere near as heavy, oppressive or satanic. In fact, Panegyrist has very little to do with the Devil, probably closer to Luciferianism which, as you well know, is a totally different ballgame. To be sure, right from the opener "Hymn Of Inversion" which serves more as an intro than a song, a series of chants and background rituals ensue and create an impression of evil dealings but the lyrics are surprisingly Christ-centered in the subsequent first track proper "Idylls Of The Cave", Tamu chanting and singing "Hear me, Christ aflame, as I fall into myself, a droplet into this subtle void" recalling more Biblical than any other imagery. Overall, though, it seems Tamu sees the divine in the energy of the Universe seeing duality of good/evil as mere human perception of the totality of the unknown and ineffable that he even bestows with no unifying moniker. All of this would fall apart at the seams if the music were subpar and Elijah knows it.

The music described above as drawing inspiration from the greatest and the most cryptic of the black metal abysses is, I freely admit, mind-boggling. At first, the very complexity forced me to give up and write this off as a work of a megalomaniac but my instinct honed in by over a decade of reviewing did not allow me to quit, whereas I consulted other reviewers to get perspective and subsequently returned for more, and I am glad I did. Panegyrist’s three guitar attack, Tamu, Brendan Maine and Vincent Ippolito layered upon each other, is further doused with atmospheric keyboards and backing vocals of David Cramer, melodies and harmonies competing for dominance amongst this forty minute plus ritual in a generally equally impressive manner only to culminate in a genuine gargantuan masterpiece of latter Death echoes that is the closing liturgy that lasts more than twelve minutes but gets everything right.

For all the magnificence and epicness even after four revolutions I do feel this music would benefit from a few more well placed powerful riffs and changes of pace as Panegyrist tends to hang onto one motiff for a long time even to the point of monotony although I suspect it may be on purpose of reinforcing the ritualistic form of conveyance in the same way as some Buddhist or Hindu chants are emphasized through syncopation in overall constancy.

Overall, a great disc for a patient and enduring ear, Panegyrist shows potential already on their first album but there are many wrinkles that Elijah & Co will hopefully spend more time getting out of their art of worship.

GIOELI-CASTRONOVO – Set the World on Fire