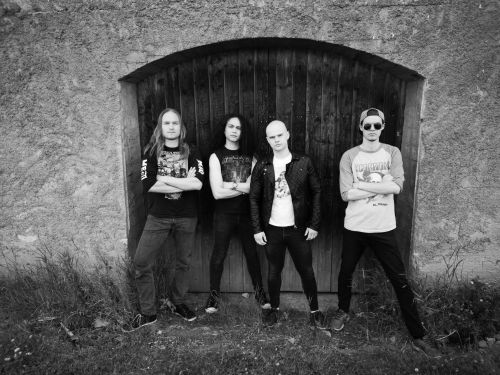 The Norwegian thrash outfit Tantara are once again ready to bring the genre back to its roots, combining heavy melodies, fast riffs and complex song structures. The band was formed in late 2009 when the four members decided it was time for another great thrash wave. All members, inspired by the heavy and thrash metal scene from the 80’s, have given the genre a new, modern edge, while still keeping true to the legacy. With this new release the band shows once again that thrash isn’t dead – it is very much alive in Norway.

The band has unleash their second single and the album title track “Sum Of Forces” to the hungry pits and the single is now available on all streaming services!

Telling the story of how society drags you down, the band takes you on a dramatic journey of the soul. The album is wide and varied, ranging from instrumental behemoths to the melodic and groovy, discovering new elements of thrash along the way. With a clear vision of making a distinct sound, they wrote most of the songs about struggle, being oppressed and finding your own path. This is expressed through the collision of violent riffs and beautiful melodies, accompanied by a critical view of society.

And so, it’s been 6 years since their debut full-length album ‘Based on Evil’, and now Tantara is back again with another full-length -a 6-track charge-straight-through-your-cranium album entitled ‘Sum of Forces’. Since the release of their debut album "Based On Evil" in 2012, they have shared the stage with bands such as Kreator, Havok, Destruction, Artillery, Gama Bomb and many other great bands. Tantara never shy away from their essential thrash roots, however, the roots have clearly grown and expanded outwards to a larger territory. The album opens up with a steamroller of a track with the title ‘Punish the Punisher’, setting the mood from the get-go, and over the course of the record, rushes through both intensely fast-paced tracks, as well as a mid-paced track, conveniently titled ‘Sleepwalker’, and closing up the album with a seemingly chilled and contemplative track that evolves into various moods and atmospheres. The riffs are as heavy and virtuous as ever, the vocals sear through your earlobes like a hot cleaver through fat, and the rhythm section shreds away throughout; truly this album offers an unquestionable satisfaction to any thrash metal fan’s needs.

These Scandinavian thrashers known for their aggressive live shows are ready to unleash their sophomore full length album, "Sum Of Forces", to the hungry pits. Tantara – "Sum Of Forces" coming September 7!