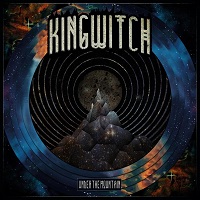 KING WITCH – Under the Mountain

UK’s newcomers King Witch, while doom per excellence, are far from your average genre conveyor, the sound built around Soundgarden’s Badmotorfinger/Superunkown albums suffused with its own special thickness which marries Black Sabbath and Mastodon along with some bonafide thrash of Megadeth/Anthrax. There is a number of key components that sets them apart from the pack of other howling wolves.

The opening war cry of "Under the Mountain" (UTM), "Don’t talk to me of blasphemy, I’d strike the sun if it insulted me!" sets up the rebellious attitude of heaviness and raw emotional insanity expressed through varied music, whereby every track is truly different but still sounds like the same band. The most unique aspect of the band is the charismatic Laura Donnelly who reaches amazing vocal highs while expressing ominous fateful hopelessness (Approaching the End) and goes totally insane and profane (Black Dog Blues) yet croons in a warm and sexy way (Ancients) giving it absolutely all, particularly on the amazing "Approaching the End" which rivals "War Pigs" (Black Sabbath/Paranoid) for magnitude of expression (yes, she destroys Ozzy) The guitar extraordinaire Jamie Gilchrist lays down thick, heavy, slimy, doomy bassy riffs (Solitary, Possession), negotiates mid paced and fast (Carnal Sacrifice, title), bona fide thrash worthy of Megadeth (Possession), and peppers it with amazing memorable solos (Approaching the End, Possession), with a wonderful sense of melody, while putting to rest the myth that all the best riffs were already written. Joe Turner’s boomy bass never goes on its own while remaining very distinct, essential yet in perfect harmony with Jamie’s lead (Hunger, Possession) and Lyle Brown pulverizes with insane drum rolls (title), conforms with the Gilchrist/Turner lead (Solitary) and goes totally off the chain (Possession) never venturing a spin off.

I haven’t heard and felt this strong of a lineup since Megadeth circa 1992, and, indeed, UTM, right on the first listen, evokes the same feelings and vibe as "Countdown to Extinction" (CTE) and this comparison also extends naturally to the track arrangement with respect to presented variety, be they as they may be from different metal planets. In the manner very similar to CTE, UTM is arranged almost in a perfect way, the leading crusher up front, followed by a flash of upcoming insanity, then relinquished in a controlled heaviness, followed by emotional, ballad-like veneer only to come completely unhinged at the end.

Unfortunately, like Megadeth’s most successful installment, much like the Biblical Garden of Delight (Eden), UTM make up contains a minor flaw, as King Witch commit a misdemeanor of placing two ballads back to back, which, too, results in "Hunger", where even the riffs appear of comparably mediocre constitution, the song seemingly not much more than an excuse to righteously promote the still amazing Laura Donnelly, thereby killing the momentum, whereby the bona fide thrash of "Possession" feels like jumping in a freezing lake straight from the sauna, thus induced hypothermia only made deadly by the equally devastating closer (Black Dog Blues) where everyone appears to have lost their minds, that latter aspect appealing in its own right. If the effect was intended, its effectiveness comes at a cost of a slight disappointment that won’t let me award a perfect score. The deduction is not a great one, because it’s a debut, where I always count every blessing while minimizing flaws.

“Under the Mountain" is an almost a doomsterpiece that sets a very high mark for the band, despite its minor flaws, and the strength of the lineup, the heard and felt herculean work of its members, the skills, the almost flawless songwriting and the flawless musicianship, combined with the very high originality already on the debut makes me predict a future comparable to Soundgarden or Mastodon.

VALYRIA – Into The Dying Of Time