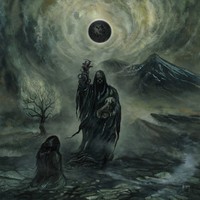 UADA – Cult of a Dying Sun

Second installment from the American melodic black metallers offers a great even journey through sophisticated melody, huge old school death riffs and a variety of vocalizations, with excellent production bearing repeated listens. Uada (latin: haunted) may be wearing their influences on their sleeves but what they lack in originality they more than make up for in execution and excellent songwriting.

What separates Uada from their genre peers is the incredible versatility of Jake Superchi who shrieks, growls, low growls, tortured banshee screams, clean shouts and croaks until completely spent (title track’s end) whereby his incredible anger and passion are felt through the metaphysical air and hit the listener square in the jaw. That is the single most original thing about the band among other black metal groups. Less so the music.

The Americans tend to build their songs around a relatively simple black metal tremolo pick and then add layers of interwoven melodies that owe as much to Dissection or Amon Amarth as to modern Kreator or Iron Maiden (c’mon, who doesn’t owe Iron Maiden?) then, having laid out all the different parts, they repeat the pattern, which sometimes works smoothly as on "The Purging Fire" and the seriously infectious "Snakes & Vultures" (you’ll be chanting that chorus along!), but other times it can seem unnecessarily long, particularly on the closer "Mirrors" (where the warm, crystal clear but powerful production allows for audibility of the excellent "walking" bass noodling) with the infamous "now I’m closing, now I’m not" in overactive. Also, some tracks share similar melodies and structures (title track vs. Sphere (Imprisonment)), though, admittedly, Uada tends to vary some tracks a lot within.

The most interesting tracks, then, are the ones that try to break the pattern and vary the pace and mood, such as the "Welcome Home: Sanitarium" (Metallica/Master of Puppets) gorgeous acoustic atmospheric "The Wanderer" where a war-like choir backgrounds a romantic solo or the very atmospheric insightful Aggalochian "Blood Sand Ash" or the fabulous title track with Obituarish moshing riffs, solos and low gutturals. In fact, it is that latter tendency to blend in a little old school death metal with their melodic arpeggios that shows Uada at their best.

I enjoyed "Cult of the Dying Sun" for four spins without feeling like every subsequent one diminished the quality or limited perception of discovered new details previously unnoticed. The Americans clearly have a knack for gorgeous melodies can craft some worthwhile songs, and have a dedicated versatile and skillful vocalist, but a little more variety within and between the songs next time wouldn’t hurt.