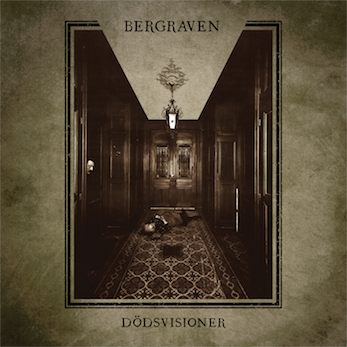 Sweden’s revered experimental black metal band Bergraven will release their seminal, critically heralded album, Dödsvisioner, on vinyl LP on June 1st with Swedish label Nordvis. Originally released by U.S. based Hydra Head Records 11 years ago, the record will get its first ever pressing on wax next month. Fans can pre-order it now at https://nordvis.com/en/bergraven-a-3.

It is hard to believe that eleven years have passed since Pär Stille’s Bergraven released Dödsvisioner into the black metal biome. Impishly experimental and yet highly honed and focused, it is an album that seeps its way into the subconscious as all the best black metal is wont to do. Perhaps the most striking sensation you get when listening to this album is that doom-informed riffs, idiosyncratic grooves and shadowy interludes included, you are experiencing the work of a mind open to integrating sounds that are rarefied in the often stubbornly traditional black metal genre. It would be difficult to talk about Dödsvisioner without a nod in the direction of Xasthur and Burzum before them, but Bergraven’s black metal is not as repetitive and only sometimes as hypnotic as these forebears. The subtle shifts in tempo and dizzying experimental deviations rife on Dodsvisione play tricks on the listener’s mind, much like mountains from which the first part of the band’s name come can disorientate and confuse weary walkers, rendering madness a distinct possibility.

“It was more than ten years ago, I had written the darkest music I possibly could. I made so many demos, of the songs, trying to find that perfect balance between listenable music and just pitch black death and sorrow. I was haunted by thoughts of death day and night, in sleep and awake. In many ways I had to make this album to leave parts of all these thoughts if I was to go on living a somewhat normal life. The album became like the last breath, the last waken hour, the last thought. Musically it was the direction I wanted with the band and the addition of Perra behind the drums was absolutely amazing. The doomy slow groove and the surreal fill ins was perfect and if nothing else Perra came up with the title to the album one night when in the studio. He had the perfect guts for this. I also was in contact with Mannevond from KOLDBRANN and really liked his vocal style so I invited him to come to the studio and try to mix his amazing skills with my material. It was totally amazing, I sometimes wonder why he didn’t do all of the vocals. I guess I still think the album is great, it holds so many private memories but today it has also grown out of my person, like someone else did it. This makes me enjoy it even more today and finally get in released on vinyl. Thank you so much Nordvis for making this album available in the best format and with new artwork!” – Pär Stille