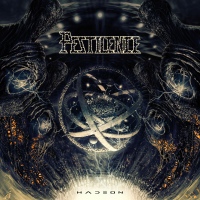 Right off the bat, I have to admit that I have never been a tremendous fan of these guys. I do own and enjoy both "Consuming Impulse" and "Testimony of the Ancients" on CD but neither the weird-if-ahead-of-it’s-time "Spheres" (probably influenced by Cynic) or the post-reunion albums, with the exception of "Obsideo" have really captured my attention. So where does this new album stand in comparison?

While "Hadeon" both has been advertised as and indeed is, a return to the "Testimony of the Ancients", it is so merely through sound and some arrangements, but comparing to the aforementioned classic the album lacks depth and variety. Short, fast thrashy death metal tracks, while beautifully executed, blitz by without inspiring much interest, although something has to be said for the way these guys reanimate the early 90’s whereby one almost forgets it’s actually the dusk of the second decade of the next century, (for which I add 0.5 to the overall score) Still, by the time you arrive at the instrumental "Subdivisions" which neatly splits the effort in two, you’re glad to hear something different. Yes, there is some attempt at changing pace as in the eerily spacey (as in "Spheres") vocals-and-bass robotic "Astral Projection", but even that does not eclipse the overall impression as if Pestilence wrote one song in 13 somewhat different parts. Surprisingly, the sound of the album strongly reminds me of…Megadeth’s "Countdown to Extinction" (Non-Physical Existent, Manifestations, particularly) especially in the surgically sterile chugga-chugga way the riffs are constructed as well as the stellar guitar work reminiscent of Marty Friedman’s.

While, due to its similarity to the classic core sound, "Hadeon" will likely please the diehards, I fear it will do little to draw the new converts, if my experience is any indication.