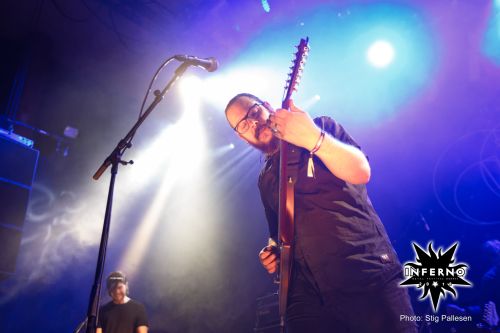 IHSAHN live@Inferno Metal Festival 2018
Photo by Stig Pallesen/StiPa Photography
On Saturday I skipped so many bands I don’t really know what’s wrong with me. I was mainly interested in Nordjevel, Ihsahn and Satyricon. I kinda saw Memoriam tho, I was there physically but I got bored, my mind was elsewhere and I kind of closed my eyes and fell asleep at one point because I find DM that bores me soothing. I have had a good nap in a Coffin concert before. I actually love those power naps between concerts, it can be recommended.

But going back to the first band to play that day, Nordjevel, they are one band that everyone into Black Metal should listen to, because they have an excellent BM structure in place. In addition they have a good epic vibe that adds to it. They are pretty technical. Plus you get the best out of norwegian and swedish sounds. They got loads of pyro so they scare me not once, but twice and then the third time I was kinda expecting it. After several explosions the war BM machinery was over. This year’s Inferno had pretty awesome openers indeed!

SATYRICON live@Inferno Metal Festival 2018
Photo by Stig Pallesen/StiPa Photography
Well I had seen Ihsahn before in Trondheim. They do play more in Japan than they do in Norway it seems. This time around it was a different experience because I spent my time wisely earlier that afternoon and went to see Ihsahn’s guitar clinic at the festival’s hotel. I’m glad I did it because I finally understood thoroughly what he is trying to do with Ihsahn. It did wonders to get him explain every possible detail. So it was an eye opener. I’m pretty open for non metal influences in metal, but I need help to digest it. It was a concert I enjoyed a lot and I even payed attention to the different tunings and details that he enlightened us about previous the concert. It was complex and excellent.

After Ihsahn I went to grab something to eat and then waited for Satyricon. Satyricon turned out to be a wobbly experience. The drumkit was just wobbling so much some guy was there behind Frost trying to steady it. He was following every move nervously hoping for it to hold. So yeah when that guy behind Frost got too distracting for me and giving the fact Frost doesn’t get to really shine in some songs in my opinion, I spent more time looking at the other guys. Satyr being a pretty cool frontman to look at, not every frontman carries himself in that authoritative manner on stage. When it comes to Satyricon I’m pretty into some songs especially those from Rebel Extravaganza. Some stuff from Nemesis Divina as well. I like the more groovish tunes of Now, Diabolical and enjoyed those in the show. But I’m still trying to get into the latest album Deep Calleth Upon Deep that I find rather cold, a bit surgical and taking into account I’m a fan of extreme music mainly, well I need at least some groove to keep my eyes opened. But at the same time I’m glad Satyricon’s audience will grow even more now because DCUD is a more accessible album. They are being succesful in branding themselves.

MEKA NISM – The War Inside