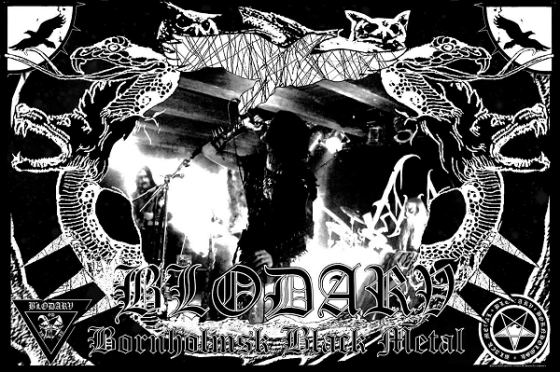 Danish Black Metallers BLODARV are ready to announce their new drummer with the arrival of Galheim  (DENIAL OF GOD, AD NOCTUM, EXMORTEM, LIVJATAN) on a full time basis.Commenting on the new addition to the band, founder and frontman Hugin had this to say:

"Not only do we consider Galheim to be the best Danish drummer that ever walked this earth, but also, and even more importantly, we consider him to be the only real match for BLODARV, not just from a musical perspective, but also when it comes to the ideology, visions, and essence of the band. So much so, in fact, that we actually neither looked anywhere else, nor accepted any applications from anyone to take over the drummer’s vacancy. Everyone in the band was in agreement that we didn’t just want a great drummer, we wanted one who was hewn from the same rock as BLODARV, and Galheim was that person.

"He has his roots firmly planted in the Danish Black Metal scene of the 90’s and is someone we can connect and sync with, both musically and on a personal level, because he shares and understands the passion and dedication that goes into a life’s work such as BLODARV. Not only do we want to keep the flame burning, we want to add fuel to the fire, elevate the band, and sharpen the knife that is BLODARV ".

Conceived in 1994, and originally formed as a solo project on the Danish island of Bornholm, Hugin decided to develop and expand on the experience he had gained whilst playing in bands such as MISANTHROPIA, SANSÂGER and ARANRÚTH, and in 1999 he launched the first BLODARV demo.
Having turned BLODARV into a fully fledged band in 2002, Hugin has, since then, proved that in order to give a voice to his poetic and lyrical creations, he is totally unafraid to mix classical, industrial and ambient elements to form BLODARV’s distinctive take on Black Metal
With three full length albums, some very tasty limited edition boxed sets, and several EPs and Splits under their belts, Hugin confirms that, energized by the arrival of Galheim, the band is now dedicating as much time as possible to rehearsing a formidable new stage show and ensuring that BLODARV’s raven banner will soon once again flutter proudly on stage. "We will return stronger, darker, and more powerful than ever before"

More information about BODARV can be found on the band’s Facebook page at www.facebook.com/blodarvofficial and on their website at www.blodarv.net