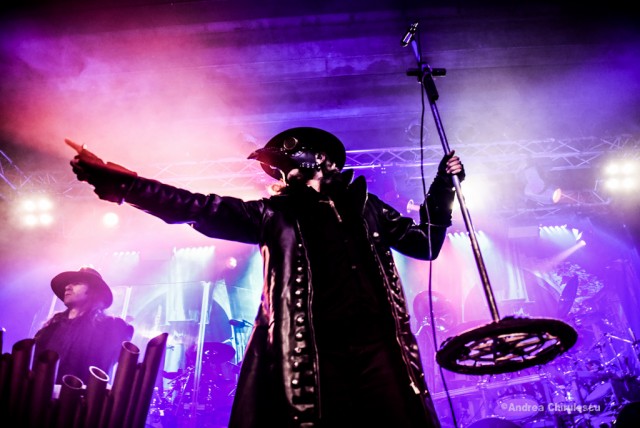 Winter/spring concert season continues in Oslo with a Sunday at Vulkan Arena that is now hosting Moonspell and Cradle of Filth, both bands promoting their latest releases (Cryptoriana – The Seductiveness Of Decay for CoF and 1755 for Moonspell) and both being names big enough to headline the tour. A tour that started already in January and has seen the musicians on the road for more than a month and a half, a situation that can reveal both pluses and minuses of the challenging tour life. The routine and improvements with each show might get weakened by the tiredness and who-knows-what issues arise during so much time in a cramped bus, away from families and friends. But luckily we were not presented with any of the possible negative aspects for the evening, making it an overall delightful experience.

The first part of the experience was delivered by the hard working Portugese band Moonspell. I lost count of how often I’ve watched them perform but every time I am as surprised to see the same amount of energy and intensity in everything they do on stage. There’s no compromise, except maybe the holes in the clothes, since they’re also a certain theatrical part to accompany the songs. The theater and Fernando’s clothes (mainly) were inspired by the theme of the latest album, 1755 – the year with a devastating earthquake for Portugal and with a lot of stories of both good and evil that Moonspell tried to picture in their lyrics or through their stage show. I was a bit surprised to notice the cross attached to the microphone stand or at Fernando’s neck, or when he lifted a big cross with two red lasers that were being projected all over the crowd. But I’m pretty sure that if I get to eventually understand the lyrics, it will not reveal a worshiping attitude.

Besides the cross, Fernando also wore a plague doctor mask, a long coat and a hat, but they were all removed by the 3rd or 4th song since the whole place turned into a sauna. This hasn’t stopped his mad headbanging, kneeling, screaming, thanking everyone from the bottom of his heart and, most important, singing in his awesome voice both new and old hits, as the ending Alma Mater and Full Moon Madness got everyone to finally react. I personally enjoy the new album very much and it was interesting to notice it is all in Portugese. I’m yet to try to discover its actual stories, but I finally got to purchase the CD and checkout the lyrics as soon as time allows. And now that I think of it, I am actually glad with the choices for the playlist. It brought out the most interesting songs on this album (there’s some amazingly ool vocal performances on it) and it spiced it up with the most loved hits, kinda ignoring the more recent albums. Guess this is also a compromise due the fact they were the support act and were not performing a full show. It was sad when they ended, cause they always seem to have so much more left to deliver… But you can only wait til next time.

After Moonspell there was like a half an hour wait for the drumkit and classic Moonspell keyboards (with big pipes) to be removed from stage and then things got set up for Dani&his band mates. A very negative aspect was that it had gotten extremely hot inside the venue. I haven’t been at Vulkan Arena in a long time at such a packed concert. I don’t remember if they ever had ventilation that can handle a packed venue…but I started feeling a headache installing as the winter clothing was not of much help.

Cradle of Filth  live at Vulkan Arena/Oslo
Photo by Andrea Chirulescu
Cradle of Filth took the stage in a majestic style, while the intro song was blasting from the speaker and the musicians got their ‘on your marks, get ready, set, go’ positions on stage. From there they went on with fury and madness, headbanging like crazy, walking around all over the stage or singing from the bottom of the lungs (in Dani’s case). Unfortunately, the technical side of things was not working in their favor, especially during the first song when the vocal part was being lost at times. It got better, but as I moved a bit more back, it seemed like some parts were not fully in place. But I must admit I was also getting kinda fatigued due heat and even if I tried to survive with glasses of water, the growing headache convinced me to give up during the 4th song. So I don’t have much more to write about the CoF show but I really hope it was enjoyable for those who managed the remaining hour of sauna.
PREVIOUS POST