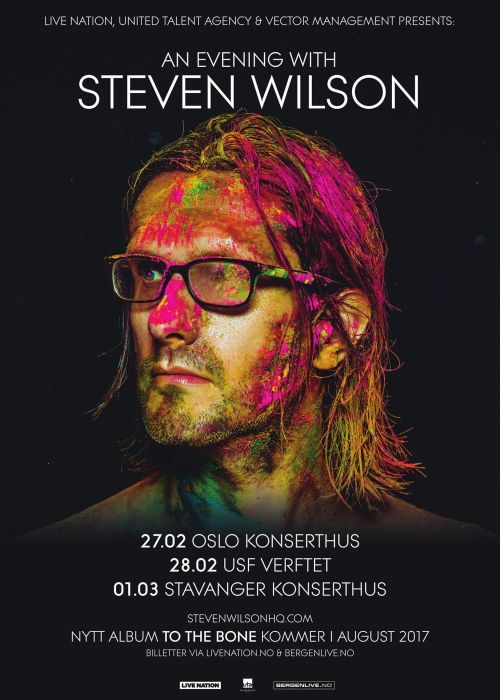 The British sensation that is Steven Wilson paid the lovely city of Bergen a visit on a bone-chillingly cold Wednesday evening and performed a 2-hour set that can only be summarized and described as otherworldly and mesmerizing. The venue, USF Verftet, was the ideal location for Wilson’s somewhat elaborate and highly professional stage show in that the aforementioned place has a certain warmth, charm, and atmosphere to it that lend themselves well to these types of concerts. Having never witnessed Wilson and his hugely talented ensemble in a live setting before, it goes without saying that I was extremely excited about this one, especially given that the “To the Bone” (2017) record blew me away and left me in awe of Wilson’s skills as well as the depth, tone, and nuances of his compositions. Luckily, a fair amount of tunes from the aforementioned album was aired, but we shall get back to that. There were loads of people from all walks of life at the gig last night, which was great to see. A few general notes about Steven Wilson’s performance inevitably include words and phrases such as “professional”, “utterly impressive”, and “superb musicianship that defies words”.

The opening film montage entitled “Truth” was a captivating and thought-provoking piece that served as the perfect opening to the band’s actual set, which consisted of such magnificent songs as “Nowhere Now”, “Pariah”, “Home Invasion”, “Regret #9”, and “Refuge”. Other fantastic tracks that left a deep impression were the irresistible “People Who Eat Darkness”, the insanely memorable “Permanating”, “Song of I”, “Detonation”, and the Porcupine Tree classics that are “Lazarus”, “Heartattack in a Layby”, “Sleep Together”, and “Even Less”, the latter of which served as the first encore. There was a cinematic quality and a certain melancholy aura to the affair not to mention that there were plenty of surprise elements throughout the show with respect to the set list and the visuals that were employed. Well, at least from my perspective as someone who is relatively new to certain parts of Wilson’s vast catalogue of material there were plenty of surprises in store for us. The sound was pristine, which is to say crisp and clear, and the visual backdrop depicting all kinds of interesting and relevant things that corresponded splendidly to the music and lyrics worked like a charm. In that sense, the concert was one of those glorious experiences that appealed to all of one’s senses. It is rare that one encounters a group of musicians whose interaction with each other and what they manage to convey from the stage exists outside time and space, but that is exactly what happened last night and what these guys managed to do.

The final song of the evening, or the final encore, if you will, was the sublime and gut-wrenchingly beautiful “The Raven That Refused to Sing”, and the fact of the matter is that yours truly lacks the words to sum up just how moving and haunting that was. A sublime ending to a triumphant show that left us all floored. The entire thing was just all-consuming and as close to perfection as you could possibly get. Words are futile; you need to experience this stuff for yourself. Make sure you catch Steven Wilson and his cohorts live on tour somewhere.