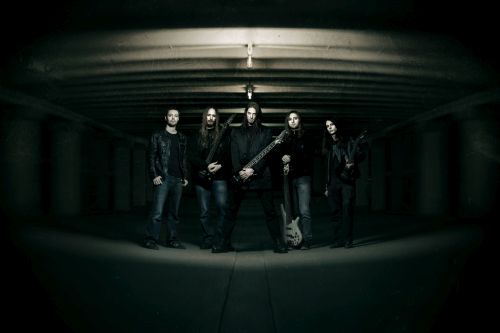 "Azagthoth"
From the forthcoming new album

Digipak CD
Gatefold LP in various colors
The Pre-order
http://smarturl.it/AlkaloidLiquid
The Statement
ALKALOID drummer Hannes Grossmann comments: "It’s been three years since our debut full-length came out and we’re thrilled to finally give the world a glimpse of our newest effort, ‘Liquid Anatomy’. The track ‘Azagthoth’ picks up on the Lovecraft theme (as revealed by the title) that was already featured on our previous album, which made it a perfect fit for the first single. All 8 songs on the new album are drastically differing from each other as their stylistic and dynamic range is much wider than before. At the same time, we managed to create a cohesive record, on which every song can stand alone and simultaneously adds to the full picture. Even though ‘Azagthoth’ comes across as quite catchy, it’s a very complex track with polyrhythmic time signatures. For example, I am playing the drums of the song’s chorus with my hands with a simple 4/4, while my feet and the guitars are mimicking a 5/8 that is running through the entire track. Well, this kind of musical complexity will not come as a surprise to listeners of our previous record. However, our songwriting does not focus on complexity or technicality. These things matter less than writing a great timeless and unique song that is not confined by any musical boundaries. This being said, I hope that you will like this song as much as we do. Have fun!"
The Biography
Hissing, creeping, crawling, sending forth a multitude of sonic tentacles, swirling in dissonant chaos, and holding on to moments of sane clarity – ALKALOID take their musical references to H. P. Lovecraft’s Cthulhu mythos seriously on their sophomore full-length, ‘Liquid Anatomy’.

Taking its name from a class of chemical compounds that are often used for pharmacological ends and sometimes even possess psychotropic capabilities, ALKALOID is defined through the field of tension created between various musical opposites. The band merges extreme metal and other genres of music into a unique progressive style that the listener might somehow find familiar but has not heard its exact like yet.

This collective of friends started to work on their debut album ‘The Malkuth Grimoire’, which was successfully crowdfunded and self-released in March 2015. After playing shows across Europe and a special gig in Cairo, Egypt which included a video shooting for their song "Cthulhu", ALKALOID are now demonstrating insanely rapid musical progression with their second album. ‘Liquid Anatomy‘ combines the maturity to be expected from veterans in the field of extreme metal with the fresh approach of a band eager to explore new paths.

NEUROSIS return to Europe in June