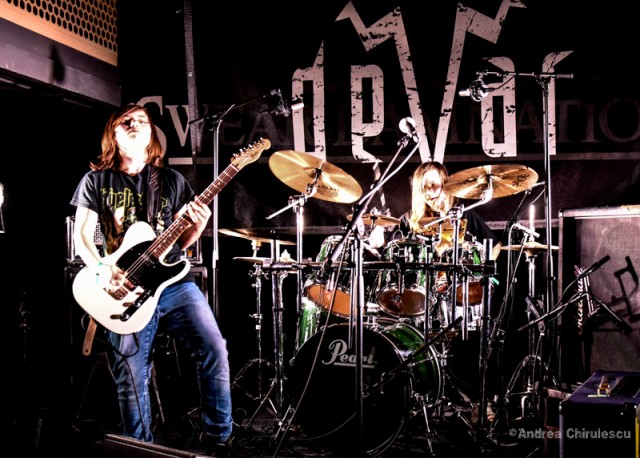 GOLDEN CORE live@Sentralen, Oslo 2017
Photo by Andrea Chirulescu
A cold Saturday evening in February in Oslo tends to be one of those days with plenty of concert choices and I personally picked the album release for the Norwegian act Sunswitch. The powertrio from Trondheim has been rather quiet since their self titled album in 2012 and I can’t describe the excitement I felt when news about a new release and upcoming concerts started to show up on the band’s social medias. So well packed with warm clothes and penguin moves, I made my way to Blå in Oslo little before the support act started their relatively short set.

I’ve seen the very talented youngsters in Golden Core and their mix of stoner/prog/sludge/etc live a couple of times before, and even if it has only been few months since last time, these kids have evolved a good deal of levels in their stage presence. Not that it was ever childish or anything. It just got better and darker and more intense. It was also the first time that I see the young duo on such a big stage, but the two of them and their massive music (plus some big amps) were enough to fill it and not make it seem like there’s too much empty space. I was also pleasant surprised to see that the vocal part is now strictly handled by the drummer Johannes Thor Sandal which makes it for an even more captivating experience altogether. Too bad that the spot I picked was not delivering the best of vocal sounds so I can’t comment much on that part. But nevertheless, being able to drum and sing surely is a great skill to manage and probably comes with a lot of challenges.

As there was a curfew for 11PM due another even at Blå, the break between concerts felt rather short and Sunswitch took over the scene. A bass, a tuba and a drumkit. Some sort of apex of low pitched instruments and I really enjoy such combos. Plus watching a rather thin guy rocking a tuba on stage is always an unforgettable sight.

SUNSWICTH  liv@Internasjonalen, Oslo 2012
Copyright Andrea Chirulesc
Sunswitch has recently released "Totality", a two songs album with a duration over 35 minutes. I didn’t get to familiarise myself with the tunes but I am pretty sure they were performed as the beginning of the concert. So at first impression I can say they feel softer and lazier for a while, but then the cool bass groove gets to stand out more so I can’t really complain. But after a big of ambience added by the tuba and the pedals effect, hell breaks loose and the three guys go nuts and remind the audience of the post apocalyptic insanity they delivered on the previous release. And then the level of intensity in this concert has only gone upwards, culminating with the song called ‘Concorde’ which is my personal favorite as it has the right balance of creepiness, heaviness, grooviness and loudness. Seems like other people loved it as I’m pretty sure I noticed some heavy head/body banging around me.

The way the music flows made it seem like everything lasted for under 5 minutes so it was sad to realize that the artists came back on stage only to quickly gather their instruments. Now I am looking forward to get the time and mood to digest the new Sunswitch. Also the new Golden Core is out in two weeks if I heard correctly. So plenty of awesome tunes to look forward to. And hopefully more live sessions, not necessarily related to a release every 4th year or so. The world needs more bass and drums and tuba together on stage.