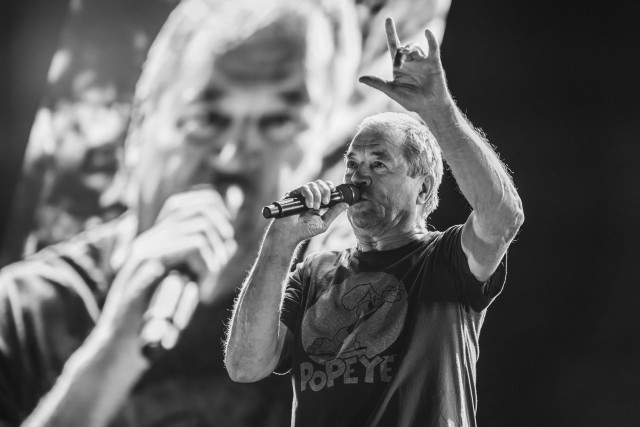 Deep Purple@Oslo Spektrum
Photo by Aleksander Eilertsen
There’s always mixed feelings before attending a concert of a band whose musical career is older than you and who are out on their Long good bye tour as most of the members are close or have already passed the age of 70. They are a big part of your childhood soundtrack but will they revive it or renew it? In a good or bad way? These were my thoughts prior to Live Nation’s event – Deep Purple’s concert in Oslo Spektrum on Thursday evening. Luckily, the questions had received pleasant answers.

With only 3 of the classical lineup (Ian Gillan (72) on vocals, Roger Glover (71) on bass and drummer Ian Paice (69)), the British rockers did offer a good dose of the talent that gave them the fame along the years. It was very nice to see all of them in a good mood for a live show, with big smiles and good energy, funky dance moves and stage interactions, without anything of extravagance. Actually, the whole show had a pretty simple and laid back setup, the main thing standing  out being the gigantic screen behind the musicians, where both projections and live images were displayed and nicely mixed during the songs. The light guy was not having a very busy night, but I would have liked him more if he (or maybe she) didn’t use the max power of the big white lights facing the crowd, just after you’d spent good minutes in the dark. It got painful at some point.

Deep Purple hasn’t played the card of a classics only setlist, probably bringing some disappointment among the crowd – which seemed frozen most of the time and only reacted to the classics (like Smoke on the Water or Space Truckin’) by cheering for few seconds then lifting up their phones to film the heads of those in front of them. Speaking of classics, I think Ian Gillan knows his limits as he didn’t try anything too fancy with his voice and thus made some of my favorite choruses not so pleasant to listen to. But he’s that good old Deep Purple voice which sang this perfect Child in Time tune once, so no more complains about it no longer being as sharp at this age. He also gets bonus points for the Popeye tshirt he chose to wear for the evening.

Deep Purple@Oslo Spektrum
Photo by Aleksander Eilertsen
The concert had the expected solo bonanza, mainly keyboard solos which are a pretty well trademark of the band’s sound. There was fascination in watching Don Airey’s making it seem like playing 50 notes per second on a keyboard is easier than breathing. He surely scored some bonus points with the crowd with his interpretation of Solveigs Sang and Dovregubbens hall. Steve Morse and his guitar delivered with a lot of passion, despite the bandaged right hand which didn’t stop him from showing excitement for what he’s doing on stage. Hopefully there was little pain that had to be hidden.

In the end, I am glad to have witnessed a show from their good bye tour and see an example of a rock legend who delivers a simple and intense show, who still has fun on stage and offers the feeling of friendship, who, despite the dead crowd, still bothers to say thanks and tell the audience how amazing it was and who, most important, has the skills to blend newly released materials with 20-30 years old hits and make them fit together.