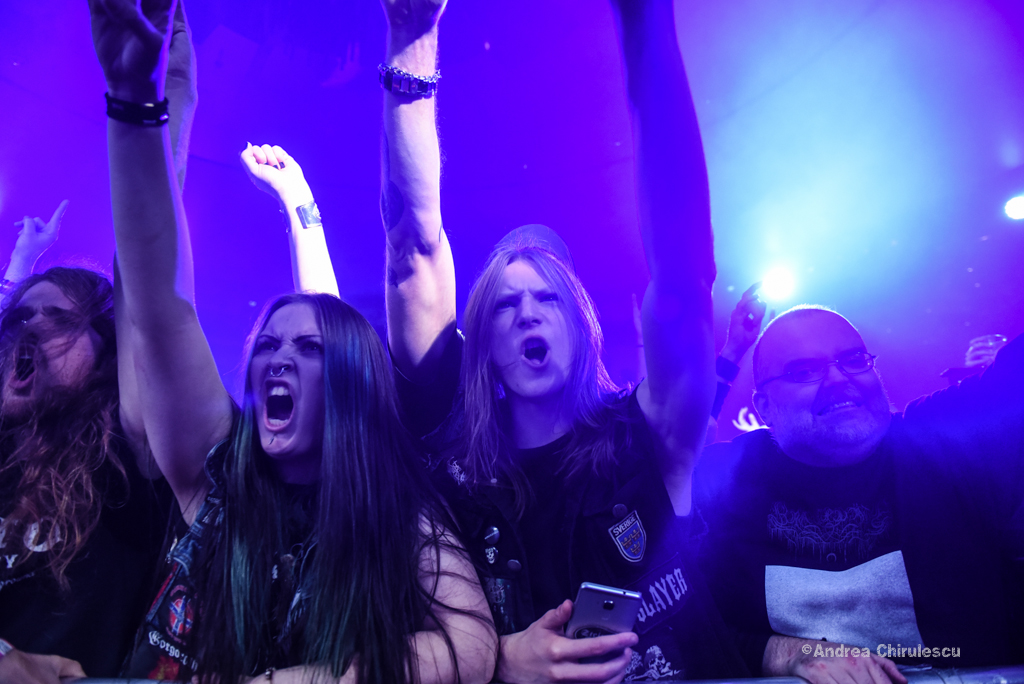 Crowd@Close Up Båten 2017
Photo by Andrea Chirulescu
Close-Up Båten – an event that showed up rather often in my newsfeed and which I decided to attend after a friend insisted on how insane the previous editions were and now, looking back at it, I can only be thankful to her for that. The Swedish Close-Up magazine has been, for several years now, organizing this mini festival on the boat that does the 24 hours crossing between Stockholm and Åbo/Turku and with every edition they seem to make a rather remarkable job at picking up a solid lineup that fits well together and mainly seemed to showcase quality Scandinavian acts. They even pulled off a quick act of magic as Carach Angren cancelled few weeks before the cruise but got quickly replaced by Witchery and Ereb Altor. Having the event in a country that is high in the top of metal bands per capita surely helps with finding replacements and also with making this event possible more than once a year. The next metal crossing will take place at the end of May 2018 but none of the names on the poster is known to me at least.

Tallink & Silja Line Galaxy boat departs from a fancy new terminal to which it takes a while to get from the nearby train/subway stop, yet the journey already sets the mood for the upcoming night of blurriness since there’s a bunch of metalheads parked along the way, working on hiding the booze they wouldn’t be allowed to take on board. Most of it ends up in the bellies already thus making it for a rather friendly and cozy atmosphere in the waiting terminal where you have to spend the time until the gates to the boat open. At 18:15, boat being set to leave at 19 if I remember correctly. However, it turns out that it has been decided that a luggage check is required. A manual one, which led to a security dude in yellow tshirt being placed on each side of the queue and stopping everyone to have a look in their luggage. Can’t give too many plus points for this brilliant idea, considering it made the boarding process extremely slow and when it got announced that there’s like 10 minutes until boat departure and half of the leather dressed long haired sailors were still queuing, the checking process turned into something like open bag, answer ‘No’ to the question if you have any alcohol, look nice in the process, close bag, run to the boat. Hopefully it worked fine for everyone who paid their ticket.

Myrkur@Close Up Båten 2017
Photo by Andrea Chirulescu
The boat is equipped with cabins of various categories. My 3 friends and I went for the cheapest one of four beds and it was a decent option, considering the little time we’d be supposed to spend in the tiny space. It surely isn’t fit for big luggage and our room had been a tad too warm, but else all good. There are duty free shops on the boat, which is probably the main reason why people take these cruises in the first place, when there’s no event on them. The shops were closed on the way out from Stockholm and opened at weird hours for the return, allowing people to pile up on all sorts of packs of booze which made the walk back to the terminal quite an adventure for those who had the inspiration to open the boxes and stack them with the wrong side outwards.

Besides duty free shops, there’s restaurants, bars and few other facilities areas that I’ve read about in various ads but never bothered to figure out where they were. All that I – and most likely those who paid for the concerts – cared about was the Starlight venue which hosted the loud performances in a 2 floors theater like scenery with a standing area in front of the stage and tables/seats everywhere else. Overall I liked the concert conditions – plenty of light variation, good sound both up and down, easy to find a spot where a minion like me can actually see something on stage. The main complaint comes from the point of view of the photographer and maybe of those in the first rows – the smoke machine was a bit abused.

Enslaved@Close Up Båten 2017
Photo by Andrea Chirulescu
The concerts were split in 2 batches, and they were opened in style by Firespawn, a Stockholm based death metal band having among members Alex Impaler of Necrophobic, Lars Göran Petrov and Victor Brandt, both of Entombed A.D. They formed in 2012 and have released two records this far, but they didn’t behave at all like a fresh band and you could easily see and hear the many years of experience that each member has gathered in their careers. It was a good and brutal start, setting the right mood for the upcoming hours. Witchery had to be my sacrifice band for the evening as the body demanded more than liquids so I found myself in one of the restaurants with good company and quite ok food. Afterwards I returned to photograph Myrkur and try one more time to figure out her music. The first part went really fine, since she’s a good looking woman and very expressive in her moves. I still don’t get the music though so I joined a bunch of silly dancers on the side of the stage and the whole thing made more sense at that point.

The Norwegians in Enslaved have recently released a very progressive album called ‘E’ and they must surely have a hard time picking a balanced playlist when the performing time is only 60 minutes, you have this many good albums and songs and your songs have a tendency to last around 10 minutes. It seemed like the crowd enjoyed the selection though, both new and old, maybe a tad more louder when songs like Alfadr Odinn got announced. As usual, Enslaved is a massive presence on stage and delivers with professionalism and they even bothered having background projections for each song, showing no compromise in the quality of the whole experience. Evening ended with Swedish black metal from the Swedes in Marduk which seemed to me to have almost filled the theatre. Actually, it was rather full since Myrkur played, as all these 3 acts enjoyed a lot of attention. I’ve seen Marduk live several times and while the music and their themes hasn’t really been something for me, I must admit that the performance has been very solid each and everytime and the one on the boat was no exception showing what a well oiled machine the band has become after so many years of making music.

Moonlight bar offered the afterparty with dancing, headbanging, musical requests (I think) and lots of drinks, but most important a place where you could mingle with artists and fellow metal heads and share lots of funny stories or just work on making new ones. The boat stopped in Turku, Finland early in the morning, dropped off some passengers, picked up new ones and then left back towards Sweden. The concerts began again but rather early – for some at least – meaning that at 11:30 you’d be served a portion of IXXI Black Metal with your morning coffee or beer. The band seemed to have enough energy for everyone and they offered a very intense and pleasant way to start (or continue) the metal party. Ereb Altor is a band I recently discovered and instantly enjoyed their epic mix of doom/folk/black metal and the way they put together their covers. But the stage presence was poorer than expected, pretty individualistic performances that made it seem like some band members were out of place. Glad the vocals sounded nice though, yet I couldn’t really stay and watch the whole show.

IXXI@Close Up Båten 2017
Photo by Andrea Chirulescu
I returned later for another portion of viking metal delivered by Thyrfing, a band that released only 2 records since 2008 and who seem to be a scarce live sight as well so I don’t think they deliver the most spectacular nor the most personal of shows, yet, there’s plenty of strength in the music to compensate for that. Maybe others have said it before that a keyboard player seems to be missing from the visual landscape, so you could have the full image of the band members who put together all of those very inspired riffs and song parts.

One last break between concerts and the day’s headliner (or the closing act, however you want to look at things), were the Greeks from the mighty Rotting Christ. I’ve heard a lot of people talking about how excited they were to watch the Greeks, how they bought tickets to mainly witness them live and I could surely see that in the audience, a sight that must be a very pleasant payback for the hard working musicians. Not really sure why, but it did feel like, from all the bands on the boat, Rotting Christ had to sweat the most the be where they are now but it surely is a well deserved place in people’s hearts and on the metal scene. They deliver with clockwork precision and with no savings on the energy level. That was definitely a class ending for the Close-Up Båten event, yet the afternoon continued with room parties and/or karaoke for those who found their way to the Moonlight bar.

Rotting Chris@Close Up Båten 2017
Photo by Andrea Chirulescu
There was also a CloseUp afterparty event in downtown Stockholm, but due lack of sleep and a non cooperating body I had to skip it. It must have been a nice reunion to tell stories from the boat and continue with the metal atmosphere, thus delaying the return to real life for one more evening. But just the cruise itself was a great enough experience to make me want to return to similar future events and to give my thumbs up to the organizers for putting together this event which seems to already have a dedicated community that attends on regular basis and that builds an overall welcoming atmosphere for both new and old participants.

Photo galleries of most artists will soon be uploaded on Eternal Terror, so stay tuned for those as well.