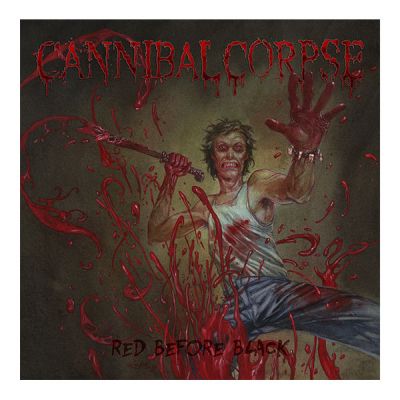 The video is Directed by Zev Deans / Panorama Programming INC, who comments the following: "After crawling through abandoned buildings, crashing our van into a tree in the middle of a scene, witnessing a real stabbing and drenching ourselves in fake blood in a derelict park at 5am, we can safely say this was a proper introduction to the slasher genre for Panorama Programming. We brought a slab of fresh meat back from a rotting metropolis, and we’re serving it to you raw. Come and get it."

"Red Before Black" can be pre-ordered at http://www.metalblade.com/cannibalcorpse
CANNIBAL CORPSE LineUp
Alex Webster: Bass
Paul Mazurkiewicz: Drums
Pat O’Brien: Guitar
George "Corpsegrinder" Fisher: Vocals
Rob Barrett: Guitar
Many words come to mind when you hear the name Cannibal Corpse, but one truly defines the soon-to-be thirty-year death metal veterans: Unstoppable. Returning with their 14th full-length, the monstrous Red Before Black, serves to not only reiterate this but to once more raise the stakes, making it very clear who sets the standard when it comes to always compelling music that is equally brutal and complex. Moreover, the band have pushed themselves again, ensuring that it stands out from their catalog. "Throughout our career we’ve tried to improve the precision of both our musical execution and our album production, while still maintaining full-on aggression. ‘Red Before Black‘ continues in that direction, but might go even further on the aggressive side of things. It’s definitely precise, but it has a rawness to it that goes beyond anything we’ve done recently," asserts bassist Alex Webster. "We really worked super hard crafting these songs, practicing them, and getting them where we wanted to be more so than on any of our previous albums," adds drummer Paul Mazurkiewicz. "And as Alex said, musically I think it’s the most raw sound we’ve had – and at the same time I think it’s our most focused, tightest and catchiest record."

Having played in the region of two hundred shows around the globe in support of the titanic A Skeletal Domain, the quintet – rounded out by guitarists Rob Barrett and Pat O’Brien, and vocalist George "Corpsegrinder" Fisher – settled down to begin writing after completing their successful run on 2016’s Summer Slaughter tour. As has always been the case, there was no blueprint for what they wanted the full-length to be, rather letting it develop naturally with instruments in their hands. "Towards the end of the ‘A Skeletal Domain’ cycle we did talk about having some riffs that breathe a little more, but that was about it. When everybody started writing I believe it actually became a feel thing more than it ever has been with us," says Mazurkiewicz. "That it wound up being a really raw, mostly straightforward kind of album wasn’t part of a big plan or anything," Webster asserts. "We just tried to write the best songs we could, and this is how they turned out." The aforementioned aggression, rawness and catchiness leap out from the speaker as soon as the listener hits play, "Only One Will Die" perhaps the most ruthless yet immediate album opener 2017 has seen. What follows is a relentless barrage of ferocious music that maintains the insanely high standards the unit have long held themselves to, and while there is a great diversity in dynamics there is never a let up in intensity. The devastating "Firestorm Vengeance", for instance, sounds like the work of men only the most foolhardy would choose to mess with, likewise the title track and ultra-belligerent "Destroyed Without A Trace". The vile, lurching passages of "Code Of The Slashers" play menacingly off against bloodthirsty thrashings, while "Scavenger Consuming Death" stands out as one of the heaviest additions to one of the weightiest catalogs in extreme music. With "Remaimed" – penned by O’Brien – unleashing some sickening tones that sound wrought from an instrument designed to devastate everything and the eerie droning breaking into "Hideous Ichor", new flavors have been introduced to their sonic palette this time out. "We’re always looking for ways to move our sound forward while maintaining the style we’ve developed over the years," Webster states. "I think we managed to do that with ‘Red Before Black’ – it has some new ideas, but you’ll also hear things on this album that would sound at home on our earlier releases. We want to grow as a band while staying true to our roots".

With 2006’s Kill and the two releases that followed it – 2009’s Evisceration Plague and 2012’s Torture – the band forged a tight bond with renowned producer Erik Rutan (Hate Eternal, Goatwhore), and for Red Before Black they chose to reunite with him. Comfortable and confident in his company, Webster asserts that "he understands death metal better than just about anyone, both as a producer and as a musician", and with his Mana Studios located not far from their home base in Florida it was also very convenient for one of the hardest touring bands in metal. "We of course love working with Erik and he did an awesome job on the albums he did for us, but we just finished a long tour cycle and then worked extremely hard on writing and practicing these songs, so being close to home for the recording was a compelling factor too," says Mazurkiewicz. "These days, we don’t all have to be there for the whole process any more, but if one of us was needed at the studio we could get there fairly quick." Under Rutan’s watchful eye the sessions went smoothly and without a hitch, the only thing slowing them down being the attention to detail exercised by all involved, intent on perfecting their vision. With Vince Locke once more handling the artwork, fans can be assured that it suitably reflects the music lurking behind it. "Vince’s style has been a huge part of our band’s visual image since our very first album. With ‘Red Before Black’ he’s made another killer piece, and this time the viewer has the victim’s perspective, which is a little different for us."

With 2017 seeing a slew of stunning new releases from death metal’s old guard – including Suffocation, Obituary and Dying Fetus – it’s been a landmark year both for the genre and its early innovators, and with Red Before Black Cannibal Corpse stand strong alongside their peers. "We’re proud to be part of a scene that has great, experienced bands that stick to their guns," affirms Webster. "Death metal is an established form of underground music that’s here to stay, and the leadership bands like these have shown by staying true to the genre is no doubt part of the reason it has such longevity." That Cannibal Corpse have carved out a career spanning almost three decades is testament to their work ethic, innovative songwriting, passion and devotion to extreme music – though it still remains an astounding feat to the members, as Webster makes humbly clear. "Who could have imagined this? When we started, even Black Sabbath hadn’t been around for three decades. There simply was no precedent for a lifelong career in metal, of any kind, let alone a relatively new form like death metal. We’ve been unbelievably lucky, and we are so grateful to our fans for making it possible." In typically grounded fashion, they continue to forge ahead, seeing no end in sight, Webster stating he likes to think they have yet to write their best record, while Mazurkiewicz outlines their goals: "I would say we just want to keep it going, try to better ourselves – and finally open for Slayer!"

A USA tour will kick off in November and will be followed by a European tour in February 2018.

Tour dates and suppport acts are as follows: