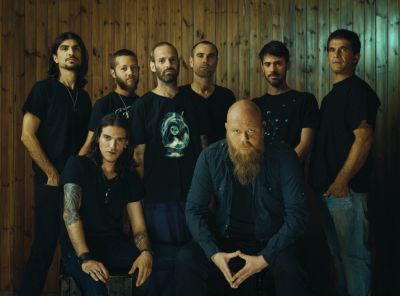 Formed back in 1997 with an idea to mix progressive rock, doom metal and 70’s-inspired psychedelic rock, Subterranean Masquerade creates music with that edge of extreme metal and the loose atmosphere of Pink Floyd and Iron butterfly. While admittedly not such a pioneering idea on its own, the vision of freeing metal music from genre boundaries, wrapped by grand production is what often make the band’s music sound like a carnival of different colors and scents… a masquerade!

Subterranean Masquerade‘s music first came into the world back in 2000 with a cover version of Peter Murphy’s classic "Cut’s you up". The cover, released as part of an 80’s metal cover compilation album, was recorded with guest appearances by Tomas Lindberg of At the Gates, Kobi Farhi of Orphaned Land and produced by Dori Bar Or from Eternal Gray.

The first official band release came in the form of a semi-acoustic two track EP (17 minutes long) entitled "Temporary Psychotic State", this recording featured Paul Khur of Novembers doom as the lead vocalist as well as JWW of Agalloch on bass guitar and Andy Winter from the band WINDS on some of the keys and synths. Released later that year by THE END RECORDS, the EP was received with highly positive reviews from media and fans alike.
In the midst of working on a full-length album, the band entered the studio to record a DEAD CAN DANCE cover track. Combining lyrics from several other Dead Can Dance tracks as well as lengthy instrumental passages, the band’s rendition of "Summoning of the Muse" was featured on a tribute album released by Black Lotus records.
"Suspended Animation Dreams" was released in 2005, "This was the most exhausting album I ever recorded… it brought oblivion to my personal life and took me to places I never wished to see.", recalls mastermind Tomer Pink.

The album was mixed by Neil Kernon and have gained recognition as one of the most elaborated and accomplished metal albums ever recorded. Immediately upon completion of the album, Tomer packed his life in the US and decided to go on a journey and travel the world, study the art of sound engineering and wait for the right time to come back.

8 years after releasing S.A.D., Subterranean Masquerade entered the studio to record a new two-track EP with a new lineup including Matan Shmuely on drums, guitarist Or Shalev and bassist Mike Feldman of Novembers doom. They expended its sound with world-music-oriented instruments and beats, adding folk music harmonies and at the same time strengthening extreme metal guitar riffage and drum blasting.
"Home" EP included a new track and a cover version of THE MISSION’s "Beyond the Pale" and released on Tomer’s new record label TAKLIT MUSIC as a limited edition 7" vinyl only, making it a well-worth return to the front just before starting to record the new album.

In late 2014 Subterranean Masquerade were finally ready with "The Great Bazaar", a new full length of everything you learned to expect from the band and a step further into the world of rich instrumentations and styles, a concept story about a man leaving home to find what’s important in life and a dialog between so called "Good" and "Evil". the album featuring Kjetil Nordhus (Green Carnation, Tristania) as the band’s new singer. "This is a great honor for us and a massive step forward for the band, I’ve been a fan of Kjetil work since the early Green Carnation albums, this is a dream come true! The album also featuring Orphaned Land’s singer Kobi Farhi on vocals as a guest appearance. "This is the first time I feel like we are a real band and not just a studio project" says Tomer. Adding keyboardist Shai Yallin and bassist Golan Farhi as band members, "The Great Bazaar" pushes the envelope of metal and of everything people had come to expect from Subterranean Masquerade. As the reviews from the worldwide media and fans alike would show, this was by far the best received release so far, and the one that put the band solid on the map of avantgarde metal.

In fall of 2016 the band performed a truly unique set at ProgPower Europe festival in Holland, receiving amazing praise by the media and fans presents. They also did a European mini-tour alongside Votum (Poland) and Chaos Divine (Australia), which put them in front of hundreds of new fans in Germany, Holland, France, Denmark and UK.
Now, 2017, Subterranean Masquerade has stepped it all up several notches. The new amazing full length, "Vagabond", mixed by Christer Andre Cederberg (Anathema, Tristania, Circus Maximus) and mastered by Tony Lindgren at Fascination Street studio, combines all the aspects that one has come to love and expect from this band, and blends them with multiple new influences. Imagine what would happen should such bands as Pink Floyd, Dream Theater, Fleetwood Mac, Jethro Tull, Opeth, In The Woods, King Crimson, and David Bowie all get together in one room – perhaps this is what it would sound like?