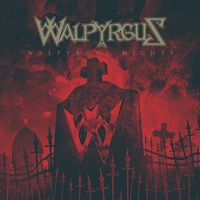 Featuring members of Daylight Dies, October 31, and Twisted Tower Dire among others, Walpyrgus come from Raleigh, North Carolina and aim to bring back the good times in their classic heavy metal style for "Walpyrgus Nights". They’ve been fairly productive since their 2012 beginnings, playing shows when they can as well as releasing singles, demos, and a couple of live albums prior to this full-length studio record.

Guitar harmonies and big vocal choruses appear to be two of the trademarks for this eight song outing- the type that you used to hang your hat upon with Thin Lizzy, Iron Maiden, and others of that NWOBHM veneer,  but also this punk spirit permeates much of the riffing and gang vocals – especially evident in "Dead Girls". Johnny Aune as a vocalist possess potent pipes, reaching right for the melody lines while also being fierce when called for – and Tom Phillips (While Heaven Wept) contributes Hammond Organ in spots that further exemplify their throwback nature. How can you not feel better at the uplifting twin guitars and unison vocal ‘ohs’ within "Lauralone", or the evil, careful licks for "She Lives" – the tempo at first giving off  a Scorpions "The Zoo" vibe before shifting between slightly faster and back again riffs. Even the Witch Cross cover for "Light of a Torch" fits the Walpyrgus good times attitude platform, and I’d be curious to see if this will continue on future efforts to aid listeners in digging deep into the wealth of old school classics barely rising above cult appeal.

Considering the fact that newer American acts like High Spirits and Night Demon are starting to make major headway across international waters, there’s no reason why Walpyrgus can’t be added to that list. This is thunderous, fist-waving heavy metal that embodies all that is right in the world.