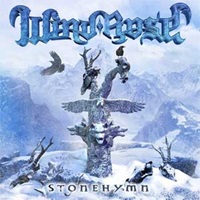 Conveying an outlook of not writing songs, but smith them against the anvil, Italian act Wind Rose on their third album "Stonehymn" deliver another set of folk-oriented power metal tracks that live for bygone times, anthems for warriors ready to battle. Choosing to emphasize more of the orchestration, choir, and folk aspects to an already established power platform, songs like "To Erebor" and "The Wolves’ Call" dance around valiantly, the guitars cascading with crunchier aspects as the vocals float in resplendent glory over the top.

The drumming doesn’t disappoint – flashing blast beats if necessary against the conventional, steady double-bass power ethics, while the twin guitar spots and keyboards provide the necessary happier or heavier atmosphere depending on context. It’s as if the group took a slight shift into adding this Elvenking-like dimension to an already potent mixture of power/progressive metal, as a result producing larger melodies, bigger hooks, and material that probably promotes big unison audience sing-a-longs. Hand claps appear in spaces of "Dance of Fire", while "Fallen Timbers" even includes accordion and Native American chant action – so it’s clear that Wind Rose will add outside the box elements to keep their sound from stagnating.

"Stonehymn" meets approval for those who need folk/power metal to escape – to traverse a bygone time and transport themselves into an alternate universe. Does it stand out? Certainly for its energetic diversity – although there are a few times where I wish they would lay off the background choirs and just let certain main vocals breathe (the closing verses for "Fallen Timbers" embodies this), but that’s a minor complaint. In the end, bombastic power metal fans and those who love the heavier side of folk metal will equally find favor with Wind Rose.