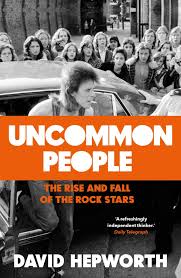 "Uncommon People" by author David Hepworth is an incredibly well-written and moving account of some of the most pivotal events and happenings in the history of rock ‘n’ roll from the 1950s up to and including the 1990s when the age of the rock star pretty much came to an end. Now, summing up what this superb book focuses and reflects on is slightly tricky in that it encompasses so much more than just the music and the rather eccentric and even downright strange folks who conjured up those timeless tunes and albums that we all love and cherish. To put it as briefly and concisely as I possibly can, "Uncommon People" is a thought-provoking and in-depth study of some of the most legendary and colorful characters and artists that have ever graced the face of the earth and why they still resonate with and within us. The reason this excellent and wonderfully vibrant 368-page book is so compelling is not only due to the lives and stories that it chronicles, but also its ability to look at each event within a larger context of world history. Hepworth discusses and sheds light on how and why certain artists, songs, albums, and music-related events shaped our culture and in turn shaped us, the fans and followers of the rock stars. What is truly mind-blowing about Hepworth’s opus is how he manages to weave pivotal moments and events in rock history together in such an informative and yet entertaining way. The gallery of pioneers includes Little Richard, Elvis Presley, Jerry Lewis, John Lennon, Paul McCartney, Bob Dylan, David Bowie, Janis Joplin, Jim Morrison, Black Sabbath, Led Zeppelin, Ozzy Osbourne, Axl Rose, Freddie Mercury, Red Hot Chili Peppers, and Kurt Cobain, just to list some of them. Not one single chapter or story failed to engage me.

The book also perfectly illustrates just how much the music business and the entire fan culture have changed during the last few decades. There is an underlying sense of longing running though "Uncommon People" that is both heart-warming and alarming. Truth be told, I felt slightly melancholy when reading certain passages and a sense of nostalgia and longing overcame me in places, probably because so much of what Hepworth states hits home and resonates with my own thoughts and feelings on different aspects of today’s music industry and the way in which younger generations consume music these days as if it were a mere commodity. Times have certainly changed and not for the better.

At no point does "Uncommon People" ever turn into a bore or become tedious. Every chapter is lively, well-researched, and fascinating. The only thing I felt was missing was more on punk rock, or the punk movement, if you will. Still, I found it impossible to put the book down once I had started reading it, which means that it felt like it was all over in a flash, but that is simply testimony to just how riveting a read it actually is. Witty and yet razor-sharp and to the point, there is very little not to like about "Uncommon People". This book is mandatory reading to everyone with more than a passing interest in music and its relation to pretty much every aspect of the history of the 20th century. On top of that, this amazing piece of literature helps and aids us in understanding how and why the idea and presence of the rock star was and is so important to us and our own stories. This is essential reading!