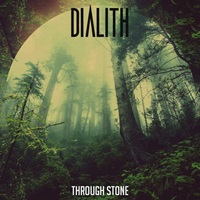 Hailing from the Hudson Valley in New York, Dialith on their debut three-song EP "Through Stone" give the listeners a potent mix of melodic metal with modern and symphonic strains. This type of music relies on strong hooks either of a musical or vocal variety – fortunately for this act, they develop both sides in spades.

Singer Krista Sion has all the versatility necessary to pull off operatic melodies just as much as sitting in more of a gothic/symphonic timbre, all facets of her voice showcased right out of the gate on "Where Fire Dwells". This track contains everything from a juggling bass line to alluring keyboard transitions, beyond a guitar hook that sticks in your headspace for days on end. "In Every Breath" has more of a straight forward power aspect, the keyboards and guitars melding as one at times, while again allowing Krista to run up and down her comforting register. Her vocals can be very Nightwish-esque one minute, then resemble the best aspects of Kobra Paige from Kobra and the Lotus the next. The guitar breaks from Alasdair Wallace Mackie are refreshing, tying in with the arrangements and main riffs brilliantly – proving that guitarists in this realm don’t have to shred insanely to get ideas across accurately. The closer "Quiver of Deception" contains some very progressive ideas in the rhythm department, most will enjoy the stop/start transitions and exotic chord progression flavoring against killer groove/hook combinations.

Perhaps the only disappointment is in the fact that "Through Stone" leaves the listener wanting so much more, as in under 15 minutes you’ll be finished – and returning for more. Now that the band has filled itself out as a quintet, we’ll see what the future holds for Dialith on the live front. For now, they are another shining beacon of the melodic metal scene stateside – do not miss out on these musicians, as they have the goods and the songwriting to go places.

LABYRINTH – Architecture of a God