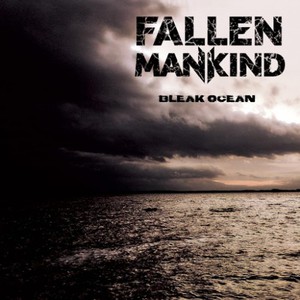 Fallen Mankind is a relatively new heavy metal from Sweden. Actually, maybe it is not so new after all. Apparently, the band was formed back in 2010, but up until now only a single and then this debut album of theirs have appeared. Entitled "Bleak Ocean" and consisting of ten songs, it sounds as if the members of the band are inspired by everything from Jag Panzer and DIO and further on to Iron Maiden and Morgana Lefay. You can definitely tell that pure heavy metal and power metal have served as sources of inspiration to these guys, not only in terms of their catchy riffs and melodies and so on, but also with respect to the epic atmosphere that is sometimes conjured up by Fallen Mankind. While certain passages and even whole songs are somewhat grand in scope, others are groovier, more direct, and slightly more bouncy, if that makes sense.

The low point of this album is Mats Hedfors’ vocals. For some reason they do nothing for me and I cannot get used to them no matter how many times I spin this disc. Maybe that is just me, but the fact of the matter is that I never get well and truly carried away by these songs. They lack that extra something, and given that the vocals fail to engage me on any emotional level, the whole affair never manages to blow me away. Having said that, the song named "Shine" does stand out among the rest, but it is not exactly a masterpiece or an all-out excellent tune. I do appreciate the variety of the song material and there are a number of cool arrangements, interesting lyrics, and memorable riffs to be found on "Bleak Ocean", but that is about it.

"Bleak Ocean" has a lot of good ideas on it and you can tell that these guys have potential and are talented musicians, but this is neither a compelling nor an emotionally engaging album. It simply lacks that indefinable spark and passion. As a result, the songs and the album as a whole never really take off and deliver something that is truly memorable and superb. Still, it will be interesting to see what Fallen Mankind will come up with next.