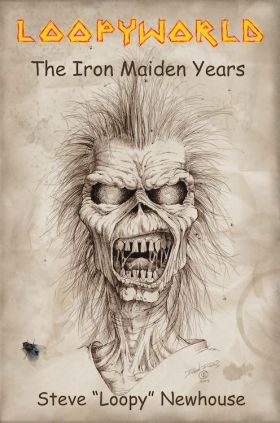 I was lucky enough to get my filthy paws on this excellent book by Steve "Loopy" Newhouse, which chronicles the early years of one of the greatest heavy metal bands to ever grace the face of the earth and their meteoric rise to fame, namely the legendary and seemingly indestructible force of nature that is Iron Maiden. Apart from a couple of sackings along the way, Newhouse was an Iron Maiden crew member from 1978 to 1984. While you may be sitting there and thinking to yourself that the early years of Maiden have already been told a million times before and are well-documented, then think again, fuckbag. "Loopyworld- The Iron Maiden Years" offers a unique and one-of-a-kind perspective into the fascinting workings of the band and how it operated. On top of that, Mr. Newhouse provides us with a thought-provoking glimpse into the lives of the various members of Maiden and how they worked together, wrote songs, organized gigs, promoted the band, and so on and so forth. If you have ever wondered what it must have been like to experience Iron Maiden in all its glory back in the day or what it was like to tour the world with these guys, look no further than this awesome book; it is the answer to all your wicked prayers. What I especially love about this story of Newhouse’s is that it has a lot of humour, warmth, depth, and charm to it. There were so many times that I laughed out loud while devouring its pages, which is obviously a great thing, but it is also a moving and touching tale in that it deals not only with a band, its music, and its otherworodly ambitions, but with human beings and human relationships too. Life is full of complications, disruptions, ambitions, doubts, triumphs, defeats, and everything in between. "Loopyworld" has it all. In fact, there was one particular story in the book relating to something that Paul Di’Anno did for the author when they were teenagers that actually brought tears to my eyes. Yeah, you read that right!

Certain things within the book, be they opinions or points of view or whatever, may strike you as less than kind or perhaps even harsh at times, but there is a huge difference between being controversial and merely speaking the truth from one’s own perspective, which is exactly what Newhouse does here. How could he not be disappointed in certain choices that were made throughout those six turbulent years? How could he not be disappointed in certain people that he had to endure at all hours of the day for years on end? Every conceivable aspect of life on the road (and in the studio, at rehearsals, or at various pubs worldwide) with Iron Maiden is laid bare regardless of whether we are talking about a positive or a negative one. I found it all rather refreshing to read and very honest. It never comes across as annoyingly bitter or anything like that at all. Rather, it is straight from the heart and stripped of glamour not to mention full of amazing adventures and laughs. This truly is an excellent story that will keep you entertained for hours and that you can return to again and again.

"Loopyworld – The Iron Maiden Years" is impossible to put down once you have started reading it. Everything flows along nicely and it has that genuine diary-like vibe to it, which is to say that it feels intimate and almost voyeuristic at times. In other words, it is a most compelling book that any fan of the band (regardless of which era of the band he or she prefers) ought to invest in ASAP. Steve, if you are reading this, please note that we love and cherish you for putting pen to paper and writing this superb book on your experiences with our favorite band. Highly recommended!