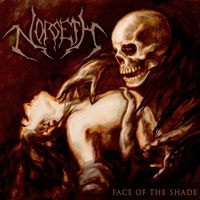 NORSETH – Face of the Shade

Originally together from 2000-2005, melodic death metal act Norseth issued "The Hexed Enigma" EP in 2004 before going on an indefinite hiatus. Feeling the need to play together again by 2012, Kevin Carr and AJ Grimes recorded songs together and issued them online – setting the stage for the recording of this 12-song full-length "Face of the Shade". Kevin handles the vocals, guitars, and bass while AJ is on drums – and this Massachusetts band understand how to perform a potent melodic death metal style while still being flexible in serving up many diverse nuances to keep the song flow varied and interesting.

Layering guitars in a stair step fashion plus adding little melodic elements allows material such as "Ascension" and "One and the Same" to immediately stand out, whether the tempos are slower or faster. It’s obvious Kevin has appreciation for the early melodic death movement, particularly Dark Tranquillity and In Flames – while his vocals roar over the top in frantic pleas for sanity, screams from the grave that send shivers through the airwaves. AJ maneuvers his kit as a percussion king, showing off-tempo chops and diverse cymbal/kick work right out of the gate on "Bleed Myopia". The duo isn’t afraid to completely turn an arrangement on a dime – dropping distortion for acoustic ambiance before returning to the electric action. The primitive production quality proves they aren’t many computerized bells and whistles infiltrating the sounds you’ll hear – but hopefully this is an aspect improved upon down the line, as some will struggle to make out the bass throughout. The guitar harmonies for "The Uninvited" shine, as does the half-time transition in the first verse- before the song see-saws between speed riffs and groove-laden parts.

Most of the material doesn’t eclipse 4:36 (only the slower "Subliminal Reign" closer at 6:15) – ensuring material that doesn’t waste time getting to the point, executing, and then moving forward for the next salvo. "Face of the Shade" proves melodic death metal still has vitality, especially in the hands of Norseth.