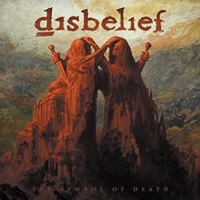 DISBELIEF – The Symbol of Death

Active since 1990, German band Disbelief may have been away for seven years between studio albums – but they’ve come back with honor on their tenth full-length "The Symbol of Death". Armed as a quintet with three new members, long-timers Karsten Jäger on vocals and Jochen Trunk on bass take newer nuances into account to their established death/thrash/sludge metal platform and as a result create a 13-track effort that glides into mid-tempo to slightly doomier pastures.

Rhythmically material such as "Evil Ghosts" and "Embrace the Blaze" traverses’ melodic death meets Gojira textures, accents occurring in unusual evil chord combinations while Karsten lopes around in his sneering, semi-growl tendencies.  The two guitarists fill the early moments of "One by One" with clean buildups, before the militant riff parade crushes in old school Death/Morgoth fashion – ‘deny your ideals’ ringing through my headspace after only a couple of airings, the narrative passage around 3:17-3:34 setting up the next snare/double bass swirling salvo. Realizing it has been seven years since the last studio album, the danger in giving the listeners over an hour of material to consume can be aural fatigue – and Disbelief do suffer a little of that sameness by the second half, making "Into Glory Ride" and the seven-minute epic "Shattered" tougher to get through.

Proof that a veteran group can take influence from another current band and filter it through their established style, "The Symbol of Death" is an interesting death/thrash offering with muscular rhythms and pit-churning musical action. Time will tell if Disbelief can make believers out of all parties young and old, but this is a decent offering that gets the job done, which is commendable in and of itself.