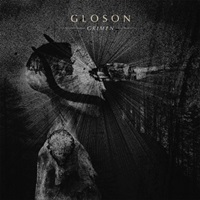 Fairly active in recording output since getting together in 2014, Swedish quintet Gloson have already issued an EP and live album prior to their first studio full-length, "Grimen". Delivering a sonically crushing mixture that contains lumbering riffs, caustic vocals, and atmospheric embellishment – these six songs aim for the mind, body and soul in a post-metal, sludge/doom mixture. The songwriting runs the gamut from bludgeoning affairs that intertwine guitar squeals and hypnotic circular movements, to a reflective and quieter piece that contains violins and whispered vocals before turning up the heaviness.

Only one song "Specter" doesn’t clip the seven minute plus mark, Gloson needing that extended time to elaborate on the foundations which tends to happen for groups that play at slower paces. Especially relevant during an eleven-minute epic like "Embodiment", because the momentum builds and subsides, occasionally allowing the rhythm section to gain the spotlight and then the guitars push themselves when necessary. These musicians have a certain underlying simplicity to the main parts, using cascading chord progressions as they layer outer dimension aspects to an already enticing portrait. Anders Persson and Christian Larsson not only share guitar duties, but also trade off on vocals – using harsh and abrasive textures to convey pain, sadness, and anger in careful measures.

If you are into artists as diverse as Neurosis, Isis, and Cult of Luna – plus a bit of that southern sludge scene – "Grimen" contains enough to grab your ear and not let go. Admittedly this is a style that many will need to be in the right mood to absorb – but the rewards can be grand. Darkness abounds, Gloson keying in on the gloom to wade through as a soundtrack to your despair.