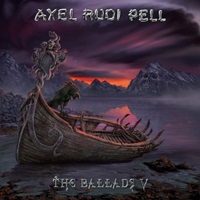 Rare is the day that an artist like Axel Rudi Pell can release his fifth ballad-oriented album to go down so well with his long-term fan base. More well-known for crafting melodic hard rock with a Blackmore flavor, these niche records usually combine previously issued cuts from his studio albums along with a few covers, new songs, and live renditions to fill things out.

When it comes to ‘new’ material, you’ll get "Love’s Holding On" featuring a duet with Bonnie Tyler ("Total Eclipse of the Heart" vocalist for those who remember that big 80’s hit), an interpretation of Ed Sheeran’s "I See Fire", plus an eight-minute effort "On the Edge of Our Time" that features the restrained Axel bluesy, measured guitar touch that tugs at the heart strings. The end of the record contains two live songs for "The Line" plus an almost 14-minute "Mistreated", with Doogie While and keyboardist Don Airey making guest appearances for the latter. At 10 songs and 73 minutes, "The Ballads V" surely offers a wide scope of his slower songs that include the professional vocal execution from Johnny Gioeli, steady supplementation from keyboardist Ferdy Doernberg and solid backbone of bassist Volker Krawczak and drummer Bobby Rondinelli.

For many, this record will be a stop gap release. Others seem to love hearing Axel Rudi Pell shift into lower gear and expand his guitar playing into more emotional terrain. There’s enough worthy material to comb through, as "Love’s Holding On" is an outstanding duet that hopefully will give ARP wider appreciation outside of his normal hard rock/metal circles. Rest assured, Axel is hard at work on his next studio platter, so there will be more melodic hard rock to treasure down the road.