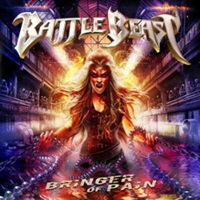 Losing primary songwriter guitarist Anton Kabanen in 2015 could be a death knell for many bands – but not in the case of Finnish heavy metal act Battle Beast. Winning the Wacken Open Air Metal Battle in 2010 which gained them a contract with heavyweight Nuclear Blast, they’ve released three previous albums while ascending to prominent status on European stages, finally coming to North America in the spring for a prime time opening slot with Sabaton. "Bringer of Pain" is the latest studio record, featuring Joona Björkroth as the new guitarist and multiple band members taking on the songwriting duties.

The quintet deliver a diverse album that hones in on many 80’s / pop aspects when it comes to hooks, choruses, and keyboard tones that create songwriting that is catchy and immediate at all paces. Be it fast and furious for the title track, or commercial and groove-oriented for the first single "King for a Day", Battle Beast know how to write dynamic material where all the players get to showcase their skills but the arrangement and performance song to song remain the major focus. Keyboard parts from Janne Björkroth look deeper into not only the 1980’s flourishes but also a bit of that militant slant that vaulted Sabaton to the top – check out the work of "Beyond the Burning Skies" and "Bastard Son of Odin" for those clear, triumphant tones. And similar to last album’s "Touch in the Night" which certainly sent some shockwaves in the system for its dance-oriented rhythms, "Dancing with the Beast" has that similar feel, allowing Noora Louhimo to use more of his sultry, lower register to contrast her obvious high octane metal nature. Closing with "Far from Heaven" a power ballad, "Bringer of Pain" sets the stage for Battle Beast moving up the ranks very quickly, as it’s the type of album that has that crossover appeal.

Call it heavy metal, power metal, 80’s-influenced pop metal – Battle Beast on "Bringer of Pain" issue their strongest set of songs to date, putting them in contention for a long, fruitful career.