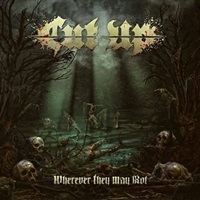 CUT UP – Wherever They May Rot

The second record for Swedish death metal unit Cut Up, "Wherever They May Rot" serves up another 11 songs of old school-oriented material, shifting between speedier, blasting numbers along with a few mid-tempo to slower offerings that crush all who dare stand in the way. The rhythm section of vocalist/bassist Erik Rundqvist and drummer Tobias Gustafsson are familiar to most ardent underground followers for their work in Vomitory – well this is a logical continuation of that foundation, just with a couple of seasoned guitarists from other Swedish thrash/death acts.

Tremolo guitar action and the HM-2 pedal get quite a workout on tracks like "Psychosurgery" and opening salvo "From Ear to Ear" – Erik spitting the words like racing to the finishing line of a track and field sprint. When the band chooses to transition speed-wise, the results could be crowd mauling – as the stomp factor a la old Entombed or Grave shows up in "Vermin Funeral", that first riff hard pressed to beat. Occasional semblances of thrash past appear in the fringes – Tobias’ cymbal rides for "In the Aftermath" probable to express a long-time influence like Dave Lombardo, while the midway machine-gun oriented guitar parade falls in line with classic Obituary. Cut Up isn’t going for a reinvention of the genre to be the most intricate, fanciest, or technically savvy outfit – they prefer to just crank things up to 10, keep the sound primal, and rarely let go of the accelerator unless called for.

Favorites shift depending on the mood – right now "Master Dissector" gets the blood flowing for certain, while "Necrophagic Madness" tears limb from limb, and the prior talked about "Vermin Funeral" gives the listener some brief mid-range respite before the next aural devastation rumbles forth from your listening device. A logical follow up to their "Forensic Nightmares" debut, Cut Up succeed in giving the death metal troops what they desire – unfiltered brutality.