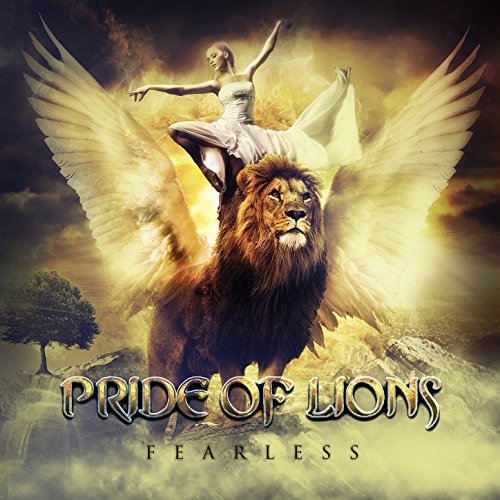 This is my first encounter with the melodic (hard) rock outfit named Pride of Lions, which was formed by ex-Survivor guitarist/keyboardist Jim Peterik back in 2003, and I must say that I have been quite smitten by this brand new 12-track effort of theirs. Musically and stylistically, "Fearless" totally takes me back to the melodic rock bands of the 80s such as Journey, Starship, Survivor, and to some extent Foreigner. Call me a sentimental fool, but I cannot help but feel a bit nostalgic when I listen to "Fearless" simply because its memorable tunes take me back to my childhood and some of the first rock music that I was ever exposed to and would listen to on the radio and so on. But enough about that. Let us get down to business and discuss this record in more detail, shall we?

Jim Peterik needs no introduction and we all know that he has a firm grasp of how to write catchy and memorable songs. The man co-wrote "Eye of the Tiger", the "Rocky III" motion picture theme song for crying out loud! He has also co-written songs for Cheap Trick, REO Speedwagon, and Sammy Hagar among others. The songs that constitute "Fearless" are instantly catchy and yet so musically layered and cleverly written that one can keep coming back to the them again and again for more. The musicianship is strong all around. There is no faulting that. The bass is quite present in the mix, which is always a treat in my opinion. Naturally, the keyboards are ever-present on the album, but it cannot be any other way considering the style and genre of music that we are dealing with here. Vocalist Toby Hitchcock does a great job and sounds passionate and totally into the words that he is singing. On top of that, you can basically hum and sing along to the guitar leads. One thing that bugs me in places is that the drums sound a little hollow. That has nothing do with the playing, but they should have gone for a punchier and more bombastic drum sound, I think.
The standout cuts are the moving and melancholic "Silent Music", the hard-hitting and uplifting title track, the energetic and intense "Rising Up", and the mysterious and haunting "Freedom of the Night", but nearly every song is enjoyable to listen to. In that sense, the album is quite solid from start to finish and rarely loses momentum. It also strikes a nice balance between the mellow and the bombastic, which is obviously a cool thing in that the band knows how to write varied material.

If you dig keyboard-soaked melodic rock and AOR harkening back to the 80s, chances are that "Fearless" will appeal to you. If you loathe that kind of stuff then you ought to stay far away from this one. To me, Pride of Lions has a way of crafting songs that make them sound authentic and full of atmosphere. The thing about "Fearless" is that it sounds inspired and enthusiastic. So many bands try to pull this kind of stuff off nowadays and most of them fail miserably, but Pride of Lions is an exception and pull it off in style. On a final note, while the music and lyrics take one back to the melodic rock era of the 80s, the sound of this record is modern and sharp.