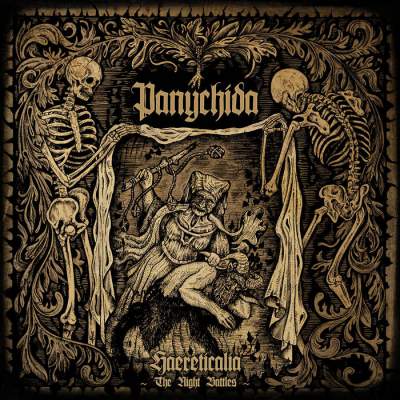 The Czech horde known as Panychida released this fourth full-length onslaught last year via Cursed Records, and the result is quite satisfying. With a strong emphasis on melody and atmosphere, "Haereticalia – The Night Battles" is a worthy follow-up to the well-crafted predecessor entitled "Grief for an Idol", but this new opus is slightly more orchestral, cinematic, and epic due to the use of keyboards and strings and whatnot. Not surprisingly, the pagan spirit that has been quite prevalent in the band’s music these last few years remains intact, but this time around the theme is more medieval-oriented and focuses on old myths and legends relating to witches, witchcraft, and werewolves. I will leave it at that so that you can immerse yourself in the stories contained wthin the lyrics on your own while listening to the songs.

The use of acoustic guitars and the many mellow and calm parts stand in sharp contrast to the bombastic and majestic passages, and I dig the variety that is on display here. The arrangements are more convoluted this time around and it might take a while before it all grows on you, but overall this is a well-written and cleverly structured melodic pagan metal assault. It just holds a few more twists, turns, and surprises than previous releases. The vocals are quite diverse too, but the production could have been a bit more warm and organic in that certain sections sound a little sterile and lifeless. A little flat, if you know what I mean.

Musically and stylistically, Panychida is obviously inspired by bands such as Helheim, Taake, Moonsorrow, Falkenbach, Bathory, and the likes, but the band does have a certain pagan thing of their own going on, so it is not exactly as if they are ripping off other artists. In the overall perspective, "Haereticalia – The Night Battles" is a solid and interesting black/death/pagan metal release. Check the closing instrumental track named "Perchtenlaufen" out and you will see what I mean. And on a final note, the CD version contains two bonus live cuts that are surprisingly decent, just so you know.

PIKES EDGE – All of Our Beauty