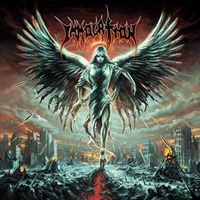 Look at that cover, that old logo that adorned only their first two albums and was thus far reserved to T shirts. While I agree that from "Failures for Gods" through "Kingdom of Conspiracy" the only sensible alternative was the new logo I don’t completely buy that they supposedly only used it now because it finally fit the cover. There is more to the story. There is their dedication to the fans who missed their old image, yes, but also their adventure with Marduk which is heard all over "Atonement", but above all Immolation wanted to make an album that rides upon the coattails of your biggest fears. See, while Ross Dolan (vocal, bass) is a proud religious skeptic he is fairly misanthropic (see lyrics to Majesty) and toys with the idea: what if at least some of the Biblical myth is TRUE, what if a giant morbid not necessarily FALLEN angel with tar-like eyes descended on the Earth, its fiery feathers upon us, the title track’s creepy melody at 2:01 over Ross praying "Angel of hatred now spread your wings, shower your thorns down upon us, anointing the pure holy water so red, taking away from us all that you can"? Pray all you want for your sins. Beg all you want for your soul. There is no atonement because you had your chance at "Kingdom" but you blew it so now just "close your eyes and embrace darkness without end" much the same way Fear Factory alluded from "Demanufacture" to "Obsolete".  Still "crucify my inhibitions, the first born son he died for my sins, nothing to worry about"? ("Catharsis"/Anthrax/Volume 8: The Threat Is Real, Ignition Records, 1998).

Already with "Here In After", the follow up to their classic debut "Dawn of Possession" Immolation clearly sent the message that they were not going to deliver the same product in a different package album to album, something that works great for Overkill or AC/DC but would be a terrible waste of Immolation’s enormous talent, skills and abilities. Immolation wants to be and is different every single time so on "Atonement" they have nothing to atone for to those who perhaps expected "Majesty And Decay Reloaded" or "Kingdom of Revisited Conspiracy", ironically sounding more tonal than ever while still writing killer original riffs that many of their contemporaries and followers wish they could, epic Paradise Lost-like melodies which they already hinted at on "Kingdom of Conspiracy" steeped in Black Sabbath now laced with wicked Marduk black metal. Yet whereas "Majesty And Decay" sounded huge and polished and "Kingdom of Conspiracy" vicious and raw, "Atonement" is perfectly balanced while genuinely creepy. In fact, this just may be their darkest offering yet, the sound a likely combination of the first four albums.

Regarding the music, Robert Vigna, the author and the finisher of Immolation sound, flirted with the black metal tremolo picking as far as 2000 on "Close to A World Below" and "The Great Sleep" on "Kingdom" opened like a black metal track proper but what he conjures up on "Atonement" almost re-qualifies Immolation as blackened death metal, primary examples being "When The Jackals Come", "Rise the Heretics", "Power of Gods" and "Epiphany" which seamlessly blend the genres. Immolation alludes to "Lost Passion" off "Close" in the closing "Epiphany", the opener "The Disrupting Light" not too distant a cousin of "Kingdom", or the huge melodic sections in "Rise The Heretics" or "Atonement" a nod to "Majesty" or even the fastest death metal parts going as far as "Dawn", the riffs bombastically epic "Here"  and "Failures" affiliations, while "Lower" a sibling "ballad" to "The Great Sleep" and "Above All"’s slow burn "Keep The Silence" off "Kingdom" to celebrate their tenth album. Immolation shows Morbid Angel how great they used to be before they started playing techno and some of the technical aspects share affinity with Suffocation, while "Above All" starts like Slayer’s "Hell Awaits", "Thrown Into The Fire" like "Cruelty Without Beauty" Arch Enemy, and title track features the super-difficult slide from Megadeth’s "Vortex" (0:22). Whether the similarities are intentional or the natural staples of their identity is anybody’s guess but what’s most unusual and therefore brilliant is the overall structure of the songs. Every track has a slow, foreboding, funeral doom rhythm, a fast death or black metal section, a melodic moment and a clear verse with some ending on a epic note like on "Majesty". What I initially considered restrained and stripped down songwriting with subsequent repetitions revealed meticulous painstaking attention to detail the likes Vigna surely displayed on "Kingdom" but while never before so carelessly now abandoning now returning to death metal convention. His newfound approach allows more feeling, air and good old fashioned evil to seep in between the notes as on the aforementioned title track and the fantastic build ups to crescendo eruption of blackened death metal fury. These songs are truly haunting and I don’t know what Ross did to sound so misanthropic and beastly while eerily still human as he stands next to Chuck Schuldiner (Death) in the art of seemingly effortless imaginative and intelligible growling that make you look over your shoulder in darkness. Additionally, Robert stepped up the melodic aspect, revisiting "Shadows in the Light" with melodies so obvious and standing out from the first spin that "When The Jackals Come" (1:08) and the title track the gorgeously creepy melodies beg for syncopated repetition, and one could also argue for the ending of "Rise The Heretics". I would have loved to hear them utilized to the extent such as on the ending of "Atonement" or on one of the best tracks Immolation ever recorded "Fostering The Divide". That last song features an intro and outro that recalls Chaos A.D/Roots Sepultura but it’s properly Immolated. In the aforementioned "When The Jackals Come" the ending sounds like the very gates of Hades being opened (and closed again at the album’s conclusion) and in "Thrown In The Fire" the transition", the build up and the jawdropping neoclassical solo at 2:21 is my favorite moment on the whole album.. One of the best things about this band is how much they can pack in a 4-5 minute track without getting the sense of passing time in which they have no equals.

As we speak I continue to discover new exiting things about this great piece of blackened death/doom metal art that is "Atonement", meriting no more than half a point deduction. Like I wanted the last two albums, I want this one to go double platinum even as I realize it won’t because people are stupid and buy shit for music these days, encouraged by their clueless facebook siblings. Vigna, Dolan, Bouks, my god, SHALATY, are all at the top of the game, drums, at times huge and tribal (Above All), production is their best ever, guitars annihilate and steamroll everything in their path, Robert and Alex basically recreating Richard Wagner on their instruments. This may be their tenth album but it may yet be their best while certainly their most accomplished and innovative work to date and one of the best death metal albums I have ever heard. And did I mention it was still darker then my nights below?

CWEALM – Odes to No Hereafter