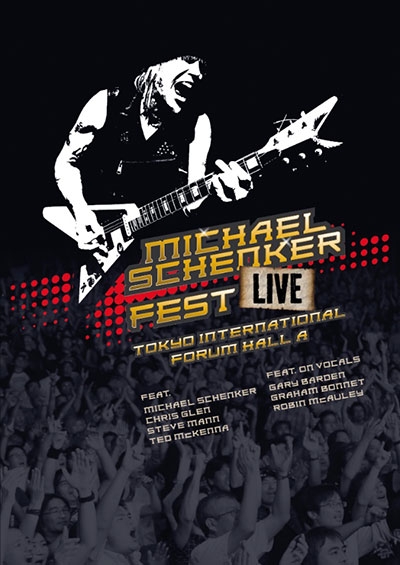 This stunning live document spearheaded by legendary guitarist Michael Schenker (Scorpions, MSG, UFO) is a thing of pure beauty. Featuring a rather over-the-top line-up in terms of musical excellence and talent, this release features not one but three legendary vocalists, namely Gary Barden, Graham Bonnet, and Robin McAuley. On top of that, the ever-awesome Ted McKenna (drums), Steve Mann (guitar and keyboards), and Chris Glen (bass) constitute the rest of the band. Filmed and recorded at last year’s Michael Schenker Fest in Tokyo in front of 5000 polite Japanese fans who were clearly there to immerse themselves in both the music and the extraordinary line-up, there is something very special about watching the M.S.G. family together on stage.

The moving introduction, "Searching for Freedom", immediately sets the tone before the band takes the stage and launches into the instrumental "Into the Arena". The sound is crystal clear and crisp, but with a lot of punch and power to it as well. One can tell that these guys are having a ball on stage. The precise drumming, the fat and beefy bass lines, and Schenker’s virtuoso guitar playing is something akin to magic in places. The entire thing is nicely filmed by means of up-close shots of the band in action that provides one with the feeling of being in an intimate setting, which works like a charm.

Gary Barden is the first one to join the band on stage, more specifically for a 5-song set of which "Attack of the Mad Axeman" is the highlight. He also nails "Cry for the Nations". Barden does a great job and there is a great chemistry and a lot of joy within the band and between the band and the audience throughout his set.

Following "Coast to Coast", the über-cool Graham Bonnet enters the stage for a wicked 3-song set. One cannot deny the power and charisma of Mr. Bonnet. That is just a fact. The standout track here is the aggressive and hard-hitting "Assault Attack", but the strange melancholy of "Desert Song" rules too.

Listening to and watching the inhumanly talented Robin McAuley sing classic tunes such as "Save Yourself", "Love is Not a Game", and "Rock Bottom" is pure bliss. It is beyond me why that guy is so underrated. He still possesses one of the greatest voices in rock! There is a lot of passion and class to the way in which the aforementioned songs are performed, especially the extended cut of "Rock Bottom". All three vocalists then join forces for the encore, the kick-ass "Doctor Doctor", which never fails to sound amazing in a Michael Schenker live setting.

Putting instrumental songs in the set in between the different vocalists to sort of separate them works well, and the set as a whole has a sense of danger and excitement to it. Like I said, the entire line-up is a thing of beauty and reeks of musical excellence. Schenker still has it and knows exactly how to deliver a great show. With three legendary vocalists and a fantastic band behind him, is it any wonder that this DVD is so cool to loose oneself in? You need to watch this, too.