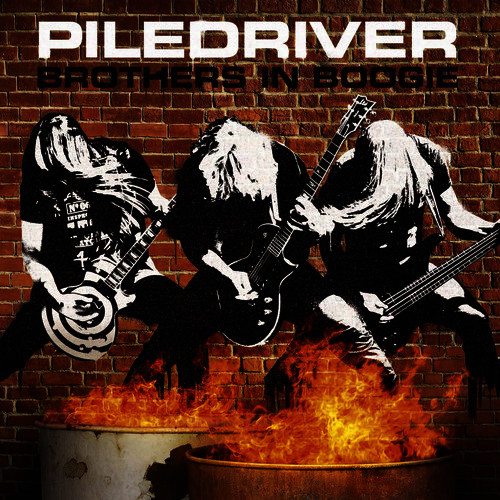 The German (hard) rock quartet known as Piledriver, which is primarily a Status Quo tribute band, released this 13-track album of theirs containing original material back in October 2016 via Rockwall Records, but for some reason the promo did not find its way to my pile of stuff to review until quite recently. Nevertheless, we shall review it now despite it not being all that new anymore.

Piledriver consists of a bunch of talented musicians who know their way around an instrument, but despite their technical abilities the songs are just not there at all. "Brothers in Boogie" is a suitable title in that the songs are groovy and bluesy, but they lack depth and substance, which results in one losing interest in the disc after only a few spins. Do not get me wrong, I love simple and memorable rock with a no-frills attitude to it, but apart from a couple of songs, "Brothers in Boogie" does not cut it. It is as simple as that. It starts off well enough with the bouncy and groovy "One Way to Rock", but from thereon out it is all pretty much downhill, which is rather unfortunate. Wait, actually "Don’t Think It Matters" and "Queen Obscene" are quite decent and have more grit and edge to them than the other tunes, but the album as a whole sounds too derivative and nothing ever really peaks on it. The band is tight, but the songs are kind of just there without having anything to offer. "Last Words" and "Natural Born Rockers" are downright awful, both musically and lyrically, so steer clear of those two!

You can tell that Piledriver is into Status Quo, Deep Purple, Saxon, and the likes, which is all well and good, but they have a long way to go if they intend to really stand out and put their stamp on the hard rock/classic rock scene. If catchy rock with anthemic choruses and big-sounding riffs is your thing then look elsewhere. "Brothers in Boogie" is simply not worth your time.

BLACK ANVIL – As Was