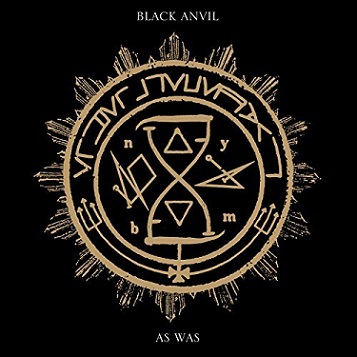 BLACK ANVIL – As Was

It has been a while since I listened to the US black/thrash metal outfit that is Black Anvil. I remember listening to the debut album quite a lot back in 2008 and 2009, but I kind of missed out on their full-length assaults from 2010 and 2014. Well, until now, that is. This brand new 8-track opus of theirs rekindled my interest in Black Anvil and it is interesting to see how much the band has grown and developed since its murky inception ten years ago, both musically and lyrically.

"As Was" is a varied affair that stretches beyond the narrow and confining limits of what is usually associated with black metal. While the core of the music is rooted in black metal, one can tell that these guys are inspired by a myriad of different bands and artists. The majority of riffs are somewhat simple and catchy while the melodies are memorable and rather morose. The album as a whole has a gloomy and melancholic vibe to it, which is enhanced and emphasized by the many calm parts that creep in again and again. I really dig the changing moods and shifts from those bombastic sections to the quiet and almost introspective ones. Having said that, "As Was" never really reaches those heights where the hair on your arms stand up or you get the chills. One could argue that the music is neither dangerous nor totally out there on the edge, or perhaps that the band is playing it safe. On the other hand, one cannot deny the quality of the songwriting, the clever arrangements, and the strong focus on establishing and maintaining a melancholic and at times epic atmosphere throughout the album. The vocals also range from clean singing to harsh screams, but the latter is not all-out convincing and sound a little weak and devoid of energy in places, so there is room for improvement. Still, if you are looking for a well-written, entertaining, and moody album, "As Was" is definitely worth checking out. If nothing else, you need to check the songs entitled "Nothing" and "As An Elder Learned Anew" out – a couple of real gems!

MORTALITY – For Whom the Bomb Tolls