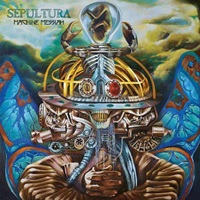 Hard to believe that it’s been almost twenty years since Max Calavera’s exit from Sepultura – leaving bassist Paulo Jr. as the sole original member of the group. Guitarist Andreas Kisser has been with the band since 1987, and at this point with Derrick Green on vocals and Eloy Casagrande on drums the quartet move forward – ever evolving in their groove/thrash metal outlook as the sky seems to be the limit creatively. When looking at the discography, it’s hard to dispute the power and precision of classics like "Beneath the Remains", "Arise", and "Chaos A.D." for the worldwide thrash landscape – and "Roots" even reached a younger underground audience ready to embrace their low-tuned tribal beats with nu-metal veneer.

So where will "Machine Messiah", the fourteenth studio album for Sepultura, stick in the catalog? After a few spins, it’s probably safe to say that these 10 songs rate very well for Derrick’s stability within the band – giving Andreas multiple avenues in musical thoughts to explore. The opening title track for instance contains dark gothic strains that made me think of Type O Negative, the lead breaks very measured and ethereal, while the rhythm section lays back and keeps the focus on echoing, ambient heaviness before the second half becomes more of the natural fierceness we’ve come to expect from the band. The follow up "I Am the Enemy" at 2:27 is up-tempo punkish thrash, occasionally gaining blast help from Eloy while Derrick roars out the chorus title like a lion uncaged. The Brazilian cultural roots also seep in from time to time, especially through orchestration and drumming elements which makes "Phantom Self" one of the highlights, a lot of the riffing and groove sequences taking me back to the "Chaos A.D." era while the melodies add a Robb Flynn/Machine Head-ish bark to the proceedings.

Eloy’s natural jumpy nature to his drumming gives "Iceberg Dances" more pep, allowing Andreas to weave in a numerous brilliant thrash, power, and bluesy metal riff sequences into the mix, while "Vandals Nest" is another speed throwback to Sepultura’s early years, the venomous, raspy vocals equal to the musical accompaniment. At 46 minutes and change, "Machine Messiah" contains probably the most memorable songs in the post-Max age for the band, and is another step in the right direction. You can’t deny their continual appeal globally, so it’s worth investigation to these ears.

VOND – AIDS to the People