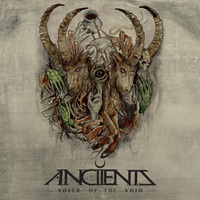 ANCIIENTS – Voice of the Void

Vancouver, Canada in the western part of the country may not necessarily get its just rewards for a vibrant music scene as say Toronto or Montreal, but there are a number of impressive metal bands coming from the area these days. Anciients since 2010 are one of the shining new beacons from that area – a four-piece generating a strong buzz right out of the gate with their debut album "Heart of Oak" in 2013. The follow up "Voice of the Void" continues to develop a left-field approach to the progressive metal genre, adding in a number of extreme/alternative elements for an explosive, dynamic sound.

You can tell right away the opening riff for "Following the Voice" contains everything from a tribal drum pattern against U2-like jagged chord constructs, before shifting into a series of Voivod-ish dissonance, with growls and clean vocals floating in and out depending on the mood and atmosphere of the instrumentation. Opeth progressive and extreme flourishes penetrate "My Home, My Gallows", while pieces of Baroness, Rush, and Tool float about in other songs. Acoustic guitars and fluid bass/ organ strains take the early segments of "Serpents" into an ethereal respite direction, providing the listener with a casual 70’s-oriented arrangement that makes the next all-encompassing salvo that much stronger. At 9 songs and 66 minutes, many would say that Anciients take the long road in getting their ideas across – and that’s true. Three of the cuts almost pass the ten-minute mark, yet never bore because of all the sideways twists and turns that take place – different vocals, dynamic tempo changes, and progressive riffs/ picking maneuvers all key to make "Buried in Sand" one of the highlights of the record.

Already making me a believer three years back, Anciients with "Voice of the Void" set themselves up for another solid benchmark in their growing discography – probably opening horizons with diverse touring packages as well.