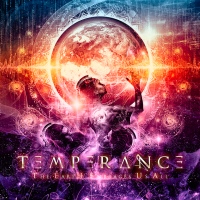 TEMPERANCE – The Earth Embraces Us All

It is the third album that establishes the band as either great or resoundingly shuts the lid of the dumpster over their heads. In my review of Temperance’s sophomore release, "Limitless", praising it, I asked whether the subsequent "The Earth Embraces Us All" would be their magnum opus. The short answer is: fuck yeah! Now to "and then some".

On their magnum opus, Temperance, takes everything that made them interesting and/or great and dials it up high, then proceeds to add folk, thrash metal, complex progressive passages, samples that would make In Flames drool, classical music and jazz, Chiara Triccarico and Marco Pastorino BOTH opening a vocal can of whoop ass from cleans, through hard rock heavy metal screams that would move Rob Halford to tears at resemblance, and finally operatic singing whereby Pastorino almost reaches Dickinson highs (Advice From A Caterpillar). Marco, still responsible for all guitars, creates duels with himself whereby Temperance sounds like Callenish Circle off "Graceful Yet Forbidding" or 90’s Megadeth (Revolution), writes heavy ass riffs that fit on a Nevermore album (A Thousand Places, Haze) and reminds Metallica how great they used to be in a 12:42 minute closer "The Restless Ride" that rivals both the old Four Horsemen and Iron Maiden in complexity, progression and pure musical value. Giulio Capone’s drums sound like guns and not at all for the last name relation because he also creates fantastic background and stand alone keyboard melodies, fills and passages, Giulio clearly comfortable with any speed or genre, while Liuk Abbott’s "walking" bass is a constant companion. Like my long answer, yet?

Suffice it to say that every one of these 11 masterpieces has progressive elements in it, everyone has ebbs and flows, everyone has killer complex chorus that beginning singers better not try to reproduce for futility, everyone is chockfull of more different melodies than two most recent Trivium and In Flames albums combined and every one has a spectacular vocal delivery and musical value. But whereas the romantic ballads with appropriate lyrics were highlights on previous installments, here there are perfect AND they are complex to boot, whereby Killswitch Engage would gladly trade "The End of Heartache" for "Fragments of Life" and No Doubt "Don’t Speak" for "Change The Rhyme", Chiara’s "regular" voice recalling Gwen Stefani. And Chiara, perfect is often not good enough for me, either, excepting this album. And Temperance is still basically a power metal band in the vein of better Helloween than Helloween while giving Iron Maiden musically and lyrically a run for their money (fantastic "At The Age of Space), and is even not afraid to sing in their own native language for just as fabulous delivery (Maschere).

And then there are two of the albums absolute diamonds, two classics of progressive heavy metal, "Advice From A Caterpillar" (8:11) and the aforementioned closer "The Restless Ride". I will not get much into those, though, unlike Temperance, pressed for space and time, suffice it to mention that halfway through the former there is a full blown genuine as Miles Davis or John Coltrane jazz passage, and the latter halfway almost made me cry for a gorgeous melody followed by full blown thrash metal, everything amongst constant jawdropping symphonic, classical and violin arrangements and melodies recalling the likes of latter Death or Symphony X.

In short, "The Earth Embraces Us All" is what happens when musicians give it all they’ve got in them. Is Temperance worth your while if you like any kind of music? Do people drink water? And if you just like metal don’t ask if people need air. And don’t ask about power metal, get it now, thank me later.