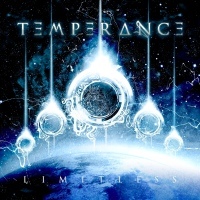 What a difference can one year make! In my review of the debut selftitled album of this Italian outfit I posited that the band was torn between writing "hits", power metal anthems, heavy symphonic rock or more death/doom riffs. On "Limitless" Chiara Tricarico, arguably one of the finest female vocals in metal, guitarist Marco Pastorino and their band decided to mix it all up and just write better, more coherent songs. The result is so impressive that they have gained an entire point in my book.

They open up with a bang, "Oblivion" a powerful symphonic number where Chiara goes full on opera crashing my jaw against the floor. The next few songs keep the high standard with tight riffs and catchy melodic choruses though kept generally in the power metal genre. Here Temperance shows their influence on their sleeves with the comedic "Mr. White" reminiscent of Helloween’s "Dr. Stein" but whereas the latter had funny creatures who become great rock musicians (Keeper of The Seven Keys Pt. 2, Noise, 1988), the former is cooking crystal meth, at the same time driving that chorus into your skull. There’s also a "hit" worthy of Eurovision, "Omega Point" recalling Evanescence (which I like and respect) with arguably one of the best choruses Temperance has penned so far, as well as equally great romantic ballad, "Goodbye". In heavier, more aggressive songs, Marco Pastorino doubles and triples now in cleans now in metalcore screams akin Matt Heafy of Trivium, as indeed, the title track is not that far from "Ascendancy" in quality of riffing. His guitarwork (him being the only guitarist) is much more powerful and metallic while increased in harmony and melody. In several tracks I can hear "feet" of Giulio Capone yet this not a Morbid Angel record, while Liuk Abbott adds significant weight to the riffs with audible bass, all caught by $10 JVC earbuds.  Every musician has clearly stepped up the game and it shows or rather, it can be heard.

Whereas the debut contained good songs and some fillers but was generally a mess of good ideas, already on a follow up a mere year later Temperance tightened up their songwriting and showed what they are capable of. While there is still room for improvement I had a hard time finding a filler in a 13 song display of their skill and talent. Sirius Black, take heed how it’s done. And that’s before "The Earth Embraces Us All". Would it be their magnum opus? You’ll find out shortly.