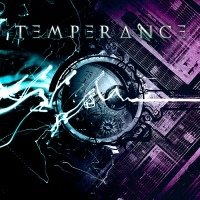 This is my first of the three Temperance reviews, starting with the debut. This Italian band consists of five members, including a very genuine, rich, warm and powerful sometimes operatic female vocalist, Chiara Tricarico. Chiara provides most vocals but there are some supporting male vocals (both growls and cleans) from Marco Pastorino. While most of the choruses and songwriting is predominantly in the power metal fashion, the material seems to be focused on showing off a wide array of what Temperance can bring to the table. We have huge choruses, great female and male vocals, impressive guitarwork but not many actual songs, the band torn between radio friendly material (such as on "Stronger" with the chorus recalling Roxette’s "Listen to Your Heart") and more aggressive heavy metal riffs. There are also signs that they wanted to go into the symphonic heavier metal after the likes of Symphony X or Evergrey, and this where they sound the most convincing and coherent.

The first three songs (Tell Me, Hero, Heavens Above) are noticeably the strongest on the record, but I also like the sing songy romantic "To Be With You" with the seductively playful "life is a lie that I only use to be with you" lyric I can certainly relate to, and the Evergreyish "Relentlessly" and "Lotus" with very catchy choruses. There are even moments of a more death/doom direction wherein they remind me of The Project Hate MCMXCIX where male growls and huge doomy riffs similarly cohabit with the female clean vocals and symphonic arrangements .

"Temperance" is a strong debut from a capable and talented band, but Temperance appears to be torn between all those different directions and more often than not the songwriting suffers for it.  However, this, being their debut album, is entirely forgivable, especially since they already make significant progress on the followup.