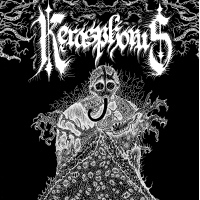 A while ago Hate Eternal released the album "Fury & Flames". It was an insanely brutal slab of death metal. Until now. Keraphorous are three guys from Angelcorpse (translation: they are from the US of A) who decided to evidently create THE most extreme metal ever, blurring the lines of black, death, grindcore, sludge, thrash with industrial touches, Karasphorous metal, if you will. The material is unbelievably raw, huge, heavy and unforgiving. Had Slayer released an album like that today they would not only be still relevant but all their crappy work would be instantly forgotten. Kerasphorous combined two of their only EPs, "Cloven Hooves at the Holocaust Dawn" and "Necronaut" and put them on one CD (6 tracks totaling 30:11), so this is not really a full length but a compilation of all their work. I mentioned Slayer for a reason because "Reign in Blood" is about the same in length with four more tracks and I know it was released in 1986 but it sounds like Black Metallica next to it.

Only because I am so familiar with metal at large am I even able to spot similarities to other bands because these guys are so original there is almost no use comparing. If you take the most technical dissonant and chaotic parts of Ulcerate, Cryptopsy, Immolation, Napalm Death, Gorguts, Morbid Angel, Hate Eternal, Neurosis, Obituary, and Watain just to create the basic sound that can be snatched from between the insanely fast dissonant chaotic order of polyrhythmic riffs, then you still will need Sadist "Crust" (especially bass), Death "Leprosy" and "Spiritual Healing", Carcass "Necroticism", Living Sacrifice "Inhabit" and Mastodon’s "Call of Mastodon" for these hedbanging riffs that will bob your head without any effort on your part whatsoever. The guys went out of their way to sound as insanely brutal as possible while still remaining catchy and remarkably audible while painting with extreme metal pictures (some described below) that will make sense in your mind only after the third application. At first it will be complete chaos but you will fish out the most memorable moments out of the chaos. Then, as you listen more intently, it will all begin to piece itself together like a Cryptopsy album after a seventh spin.

What pictures would they describe, you ask? I have never heard extreme metal music paint orgasm but Kerasphorus gets it exactly right in the opener "Locust Nexus" from 4:56 to the end, a slowly building, ever faster crescendo until climax. Two of the tracks (Aosoth Paradigm, Disturb the Furthest Stars) begin by what I can only describe as a door slam with a guitar and drums simultaneously thanks to the filthy yet clear production of I wish I knew who so that I can give proper credit. There really is no use to try to describe what else these three hellhounds are producing. Pete Helmkamp sounds like he is being skinned alive while simultaneously burning alive, his bass would make the Reginald Quincy "Fieldy" Arvizu from Korn change instrument for futility. Ronnie Parmer likely needed complex reconstructive surgery of all his limbs after recording (Lexus Nexus orgasm) and Gene Palubicki produces sounds on his guitar that should in all fairness require at least three guitarists to pull off (especially "Through The Spiral Void" and "Swarm Intelligentsia".) But that’s it, just three guys jamming around. Oh, did I mention that the riffs are often jazz-based? No? Sorry, they are.

I love it when I download an album expecting just a ho-hum death/black metal and get slammed in the face with a revelation in extremity. Go over my Amphisbaena review and read my accolades and then feel free to cut and past them here. Amphisbaena and Kerasphorous show us all where the extreme metal is headed and where to jump on a train so as not to be left behind. A fabulous gem of extreme brutality, and easily the most devastating album I have ever heard. Separates men from boys so if you’re not into it check your balls, guys.