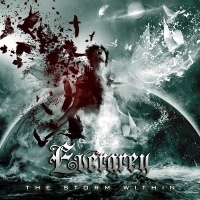 EVERGREY – The Storm Within

First of all, welcome back to my world as I have not been active for quite some time due to a lot of issues in my life I won’t get into, some of which carried me all the way back to native Poland and back again. Well, now I’m back and hitting the ground running on with the reviewing. First off, one of the most pleasant surprises of the year.

I never got around to reviewing the previous album "Hymns for the Broken" but not for the lack of interest. This is still an album I would like to review sometime as I felt it was one of their best if not the best. These guys really have a knack for crafting excellent melodic metal and to make each track  stand on its own. "Hymns" has definitely an addictive quality to it. Frankly, I didn’t think they could beat it.

Well, "The Storm Within" is even better and easily, at that. Every song has an addictive quality to it but I particularly love the opening "Distance" ( perhaps because it reflects my current life situation) with its syncopated djent-like riffing and the supermelodic "Astray" with some seriously heavy riffing reminiscent of Symphony X. I absolutely love the simple yet powerful verse riff and it immediately caught  my ear. Overall, what struck me right away is the ease and freshness with which Evergrey moves from somber, heavy, sad and slow passages to faster, more aggressive material often within the same song, there’s just so much going on that you just know they were in their creative peak when they wrote this album. The "Passing Through" reminds me of In Flames from "Sounds of the Playground Fading" and, indeed, the fills in between of some of the tracks have that kind of melodic quality that album had but "The Storm" is way heavier affair. The pacing and variety definitely is bringing more to the table than before with stronger and heaver framework. Yes, this is Evergrey’s heaviest work to date but heaviness is also expressed through incredible emotions where the electrical guitar is scarce as in the phenomenal "The Impossible" that almost makes me cry as I can relate to it on the same level as to the opener, or the break in "Someday" where Tom Englund seems to channel his Jonas Renkse of Katatonia as he sadly declares "I feel like I’ve just lost my armor". The first side (if you were to listen to the vinyl) is making me smile with delight at listening to a perfect blend of heaviness, hooks and melody and I hope the second side can match the intensity and the sheer emotionality of the first.

And sure enough it does not disappoint. While "In Orbit" with a guest vocals of Floor Jansen is a good if very memorable tune of which simple melody will get stuck in your head, "A Lonely Monarch" actually literally made me cry. The lyrics are no longer just something I can relate to, these are the words of my life. It is as if Evergrey guys (and they all do backing vocals!)  listened in and watched my life of past year and wrote a lyric about how it is impossible to have a relationship where just one party works on it and the other just takes, and, even though the active party really wants it to work it is doomed for the inaction of the other. So even though you may have felt like a king when you started the relationship, it is a heavy crown you’re wearing, and the pained, anguished incredible vocals of Tom Englund emphasize the weight.  The music is absolutely spectacular and Henrik Danhage’s solo downright virtuosic. The song verses betray the fact that these guys are from Gothenburg (oh, you didn’t know?) but the monumental chorus is epic, a bit reminding me of "Paradise Lost" Symphony X as well as Iced Earth off of "The Dark Saga", while the fast verse riffing has that Nevermore "Dead Heart" edge and punch. But it’s all pure Evergrey just better and more pronounced in all channels. Following is "Paradox of the Flame", a different, yet a sibling of "The Impossible", very emotional, very personal (again) song as if sung between two lovers about to break up, Tom in duo with his wife Carina certainly adding to the emotional depth, and finally "Disconnect" with some of the fastest riffing on the album and another monumental chorus which reminds me of Find Me off of "Wings of Love", featuring again Floor Jansen, before we are treated to the closing self-titled. And damn if I didn’t have my favorite song on this album with "A Lonely Monarch" because they saved the best for last. "The Storm Within" is such masterpiece of different colors that I challenge Dark Tranquillity (for Rikard Zander’s keyboards) to create something this touching, this beautiful, this moving, epic, monumental and catchy on the upcoming "Atoma" (November 4). The chorus is just massive emphasized by the monstrous Johan Nieman/Jonas Eckdahl section. This songs simply haunts me, especially the closing words "You were beyond the difficult" as the music fades and I have a first serious contender to the album of the year as Tom Englund rightly called it the most cinematic album in Evergrey’s discography. The last impression is the continuity between the depressing and pessimistic closer and the positive, hopeful message "It’s not over, we soon be closer than before, can’t let this distance keep our destined souls apart" of the opener, sustained by the children’s choir.

Evergrey both surprised me with this beauty but also confirmed what I already believed that they are one of the most consistent and most creative bands of the melodic power/heavy metal genre, or whatever genre you want to call them. This is just fantastic music and you can hear the blood, sweat and tears poured into it. This is, in my opinion, their greatest album and yes, I am familiar with the debut and "Recreation Day". As a reviewer you tend to get a little discouraged sometimes at how bands seem to play it safe on melodies and structure and this is where you need albums like "The Storm Within". Go get it September 9, you won’t regret it as this is an album that, while heavy metal through and through, I feel not just heavy metal fans will enjoy and embrace. Long live Evergrey!