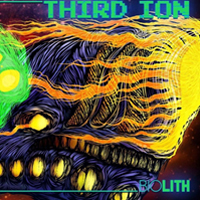 It offers up much the same fare as debut ‘8 Bit’, only this time around the whole thing is less impressive for some reason. The sound is the same as before – reminiscent of Devin Townsend (DT bassist Mike Young is a member of TI) or Dream Theatre. The first time around Third Ion did a good job of not getting in their own way – leaving the songs to breathe, not over-stylising things, not overdoing the effects and not disappearing up their own are with solos and fruity bass fills. They have not been that successful on that score this time around. While the musicianship is as fantastic as ever, the Necrophagist inspired sweeps and runs don’t add anything to the songs and only serve to annoy. And while the band are as strong as ever rhythmically, the constant changes and breakdowns interrupt the flow too often – meaning the songs become a victim of their own complexity.

Last time I reviewed these guys I was completely revved up on the potential I saw for the band, and all of that is still here – it just needs to be channelled into a less schizophrenic package.