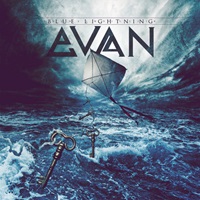 Here we have a 21-year old Greek/German guitarist in Evan releasing "Blue Lightning", a 9 song effort that intertwines guitar-oriented neo-classical metal instrumentals with a couple of vocal-led tracks that feature Rhapsody of Fire singer Fabio Lione. Those who reminisce about the Shrapnel Records days when guitarists like Tony MacAlpine, Paul Gilbert, and Yngwie Malmsteen ruled the scene should delight in Evan’s axe play and diversity, especially in "Skies of Shred" which can move from full-on thrash to jazzier interludes all in a fluid complexity.

Another stunner includes the 8:35 "Orchestra of Withered Clouds", Evan brilliantly framing an echoing melody theme that mutates and floats around this mid-tempo arrangement. It’s the type of song that you would expect from Firewind or even the early days of Yngwie Malmsteen. Those who enjoy more vocal-oriented material will have no problem getting into the high octane "Edge of the Sky", Fabio easily raising his game to the riffs on display while keyboardist Bob Katsionis provides his ivory speed dexterity to match Evan’s axe prowess. The ballad "One Last Time" also gives an ear reprieve, Fabio adding a lot of his lower register skills during the verses to convey the emotional connection. The closing Black cover "Everything Is Coming Up Roses" takes the more electro-pop/gothic oriented number and gives it a heavier take while keeping the vocals as hypnotic as the original – a brilliant interpretation.

Probably appealing most to guitar aficionados at first, "Blue Lightning" gives us another chance to delve into the art of melodic, neo-classical oriented metal. Evan has a solid chance to use this as a launching pad for the future – hopefully deciding that he can chose to spread his talent in both a vocal driven band as well as something more instrumentally focused.